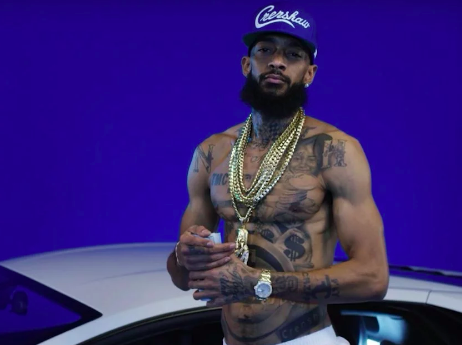 Rule number one in hip hop and R&B: Loyalty first. The enemy of a friend is your enemy, too, especially if the friend is also black.

Color-coded loyalty seems to be the default every time a black celebrity faces the firing squad of public opinion. In the black community, and particularly with black musicians, stars tend to support their own unwaveringly — unless their own also happens to be part of the LGBTQ ranks.

As the outrage over openly gay singer and Pose star Billy Porter’s tuxedo gown on the red carpet at the 2019 Oscars showed, one of the greatest sins a black performer, or a black man in general, can commit within the community is not conforming to traditional gender standards. Many black commentators, like Judge Joe Brown and YouTube personality Willie D, characterized Porter’s attire as an affront to black masculinity.

Nipsey Hussle, the rapper who was shot to death on March 31 at age 33, might have agreed. There’s no positive spin to put on his 2018 Instagram post in which he included homosexuality as one of the top-three scourges on black manhood. Alongside a group photo of black male youths wearing suits and tuxedos, Hussle wrote:

“Demonstration speaks louder than Conversation. They gone feed us every image of our men and boys but this one. No hyper violent…No homo sexual…No abandoners….JUS STRONG BLAC MEN AND YOUNG Men. RESPECT TO MY BIG HOMIE @bigu1 for Leading with love and intelligence. GOD IS WITH US WHO CAN GO AGAINST US ??”

In a follow-up tweet, he alluded to a gay “agenda” that apparently has rendered straight black men invisible and endangered.

I don’t look down on gay people I love all Gods children foreal. I take issue with the larger agenda.and I’m VERY WELL INFORMED contrary to my appearance. And my conclusion is there’s AN AGENDA…we can go fact for fact and get u some understanding if you’d like. If not God bless https://t.co/DvewsKGojS

I acknowledge the work Hussle did on behalf of straight black people, but as a gay black man, I have a hard time with the hero worship and posthumous tributes that continue to pour in for a guy who characterized me as a blemish on blackness. Why didn’t he extend his benevolence to LGBTQ blacks? In swathes of the black community, why are gays treated like second-class blacks, undeserving of the first-class status demanded from white people?

Pretty much everything else is forgivable when blacks judge blacks. We saw the double standard in action during the murder trial of O.J. Simpson in the ’90s. The groundswell of support for him within the black community still seems unfathomable more than two decades later.

We saw it again with Chris Brown after he assaulted his then-girlfriend Rihanna in 2009. His standing in R&B was virtually untarnished as various artists, including female ones like Mary J. Blige, Brandy, and even Rihanna herself, continued to flock to him as a collaborator.

We saw it last year when few black musical artists other than John Legend, a Hussle collaborator and celebrity eulogizer, were willing to go on the record condemning Kanye West for his “Slavery was a choice” declaration, or Kevin Hart when his past homophobic tweets and comedy routine killed his chance at hosting the 2019 Oscars.

At the time of his murder, Hussle’s chart tally included no hit singles and no gold and platinum albums, yet he’s been canonized like an A-list superstar. Kendrick Lamar, Sean “Puffy” Combs, and GLAAD’s 2019 Vanguard Award honorees Beyoncé and Jay-Z are among the hip hop and R&B luminaries who have paid tribute to him. Many of his fellow rappers, including Snoop Dogg, The Game, and T.I. called for the firing of Fox News host Laura Ingraham after she “disrespected” Hussle by mocking “FDT” (“F–k Donald Trump”), his 2016 collaboration with YG, on air the day after his memorial.

They have a point. Just because you can’t legally defame a dead person doesn’t mean the living should have carte blanche to ridicule the deceased. But respecting those who have passed doesn’t mean we have to whitewash the darkness right out of their lives.

We’ve seen days of reckoning recently for Michael Jackson a decade after his death, but Oprah Winfrey and After Neverland notwithstanding, his black fans and fellow black celebrities have been more than likely to remain #TeamMichael. Meanwhile, it’s been mostly up to R. Kelly’s white past collaborators like Lady Gaga and Celine Dion to publicly ostracize him.

Much like XXXTentacion last year, Hussle’s homophobic leanings have been buried in all of the glowing post mortems. His offenses against the LGBTQ community might not be as grave as those of XXXTentacion, who once boasted about nearly beating to death a fellow prison inmate he thought was coming on to him, but that doesn’t mean we must unquestioningly and unconditionally accept the heroic humanitarian portrait of Hussle that the hip hop and R&B community has painted since his passing.

Why aren’t we even acknowledging his homophobia? It’s at the root of so much black-on-black crime, yet we rarely regard it as the threat that it is. Hussle never really had to answer for his demonizing of gay black men. He equated black homosexuality with violence and abandonment in his 2018 Instagram post, and he’s still being hailed as a fallen hero, no questions asked.

The black community often has been accused of being egregiously homophobic in thoughts and deeds, and the silence seems to back this up. Rappers get away with homophobic and anti-LGBTQ lyrics while homophobia on social media is swept under the proverbial rug. Racism and cultural appropriation are, apparently, far more pressing issues, than hatred and violence directed toward LGBTQ blacks.

The ongoing Jussie Smollett controversy underscores the glaring double standard. Regardless of whether he lied about being attacked by two “MAGA” shouting white men on the deserted streets of Chicago last January 31, one wonders what the reaction from the black community would have been if Smollett were straight. The MAGA crowd probably would have side-eyed it just as emphatically, but would black comedians like Chris Rock and Tracy Morgan have been so quick to joke about it? It’s almost as if the ride-or-die rule in black entertainment applies only if you’re a straight black man — or a legend like Michael Jackson.

Until we get to a place of complete inclusion, internal discrimination will continue to divide and conquer us. All the humanitarian efforts in the world can’t save us from outside forces if we won’t save us from ourselves.