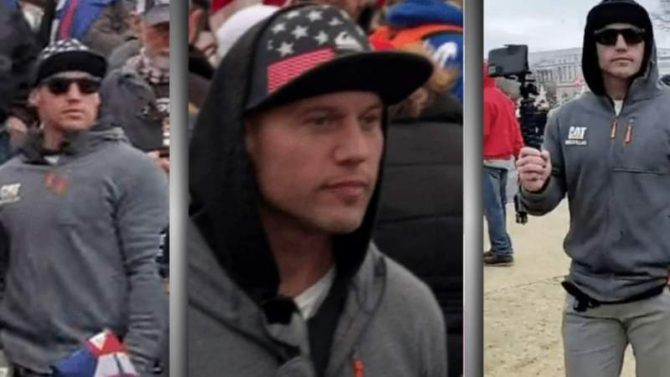 A Michigan man was just arrested for his alleged involvement in the deadly insurrection on the U.S. Capitol after investigators stumbled upon his very thirsty social media pages.

Logan Barnhart (a.k.a. CatSweat) of Lansing, Michigan was taken into custody yesterday by the FBI on suspicion of assaulting federal police officers during the January 6 attack.

Internet sleuths were able to identify the 40-year-old using facial recognition software, which then led them to a number of thirst traps he had posted to Instagram and Facebook.

In addition to being a self-proclaimed professional “pipe layer” and competitive bodybuilder, Barnhard has also appeared on the covers of at least three raunchy romance novels, including one where the main character has sex with his stepsister.

Logan Barnhart of Michigan #catsweat has graced the cover of AT LEAST three romance novels. pic.twitter.com/j2htXPWq8e

A tipping point in the investigation came when the Sedition Hunters uncovered video of Barnhart that showed him without sunglasses during the Trump rally at the White House Ellipse prior to the attack.

That image of Barnhart’s face, plugged into a publicly available facial recognition website, pulled up several other images of Barnhart that are plastered across the internet on bodybuilding websites and photography portfolios.

Photos of a shirtless Barnhart even graced the cover of romance novels with names like “Stepbrother UnSEALed: A Bad Boy Military Romance” and “Lighter,” which included the slogan “wrong never felt so right.”

Barnhart is believed to be the same man who was caught on camera dragging a police officer down a flight of stairs at the Capitol before the man was beaten with a flagpole by another domestic terrorist.

After being outed on Instagram, Barnhart deleted his profile, which had about 750 followers. His Facebook page, however, remains up, though he hasn’t posted anything there since December 2019.

During a court appearance yesterday, Barnhart was assigned a court-appointed attorney. He was released on house arrest and an unsecured $5,000 bond.