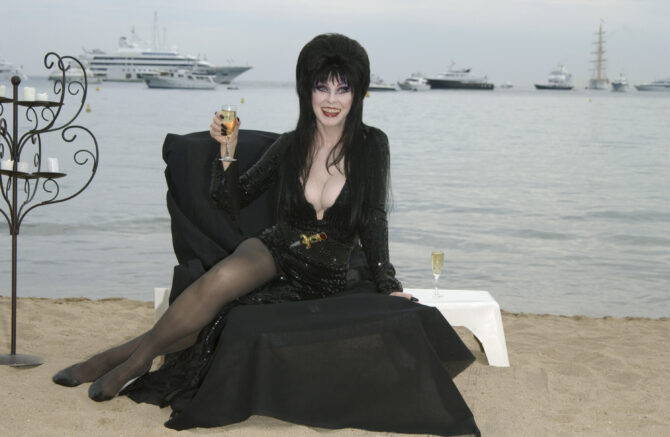 Actress Cassandra Peterson–best known as her character Elvira, Mistress of the Dark–has opened up about the fallout after coming out as queer last year. The actress has also revealed that she lost one, particular demographic of fans…and that she really doesn’t care.

Speaking with the podcast Behind the Velvet Rope with David Yontef, Peterson recalled the worldwide reaction to the publication of her memoir Yours Cruelly, Elvira, in which she revealed that she’d been in a 20-year relationship with a woman. According to Peterson, the revelation sent her fanbase into shock.

“The thing that came out that flipped everybody out was that I was with a woman,” Peterson says. “Nobody was ready for that. Apparently, we kept it a pretty good damn secret because nobody knew. Everybody was surprised. Now, our closest friends and our relatives knew. But outside a very small circle of people, even my second-tier group of friends who I’ve known for a long time did not know. It was shocking for me.”

Related: Cassandra Peterson, the gay icon that came out as part of the family

When it came to the backlash, Peterson cared most about the reaction of one core demographic of her audience: her queer fans.

“Honestly, I worried more about my gay fan base,” Peterson explained. “Because I hope they embraced it, but I was feeling like: ‘What if they think I’m a big fat hypocrite, and I was lying to them?’”

“Now, the straight people,” she further elaborated, “I knew that there was going to be some horny old men out there who were just not going to like the fact that they didn’t have a chance with me anymore. I hate to tell them: they already didn’t have a chance with me anyway. It’s funny. One of the things that happened on my social media–I won’t say which platform–one day after the book came out I lost 11,000 people. They just said ‘Elvira, you lied to me. I don’t respect you anymore. Goodbye.’ But I got 60,000 new followers the same day.”

“I know it was mostly just straight, older guys who felt lied to,” Peterson said of the backlash. “You can’t please everybody!”

Peterson went on to say that she believed homophobia played a role in the backlash as well.

The publication of Yours Cruelly, Elvira made headlines in September 2021 thanks to Peterson’s candid discussions of her life in show business, the details of her first marriage, and her coming out as queer. Peterson revealed that her partner of almost 20 years is her longtime assistant Teresa “T” Wierson. In the book, Peterson also explained that she kept the relationship secret to both protect the Elvira brand, and to respect T’s privacy.