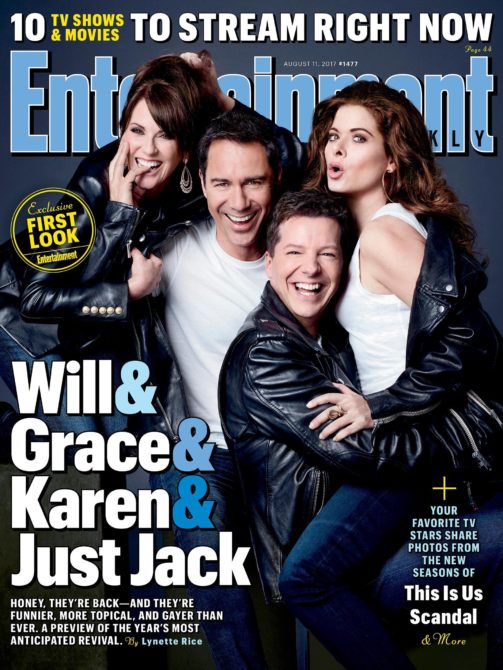 OK so it’s not quite at Dore Alley’s level, but the cast of Will & Grace is giving leather daddy realness on the newest cover of Entertainment Weekly.

In case you’ve been living under a rock, Will & Grace & Jack & Karen are reuniting for a 12-episode season of hoots, hollers and hijinks on NBC this fall.

“I want to make other people laugh right now,” Debra Messing said in the EW feature. “That’s the reason why I wanted to come back. Because I was like, ‘I really need to laugh.’”

Related: Animated film about a gay boy’s crush is so cute it hurts

“I think while we won’t back away from this existence at the moment, we will also be overcoming it and having a lot of fun,” Eric McCormack added.

“We never took on the subject of gay men in America,” said series creator Max Mutchnick. “We never did that in a heavy way. We just managed it the way we managed our lives.”

“The strangest thing about it is how comfortable and natural everybody has been with the whole thing,” he added. “We did this having not seen each other for 10 years and then decided one day to show up to work and got right back to it. Here we are. That’s a pretty bizarre thing.”

Sean Hayes mused: “Everything that happens in the world is ancillary to their lives but it’s not the focal point. This show is not about Trump or Hillary Clinton. It’s about us.”

Check out a video of the gang waxing poetic below: