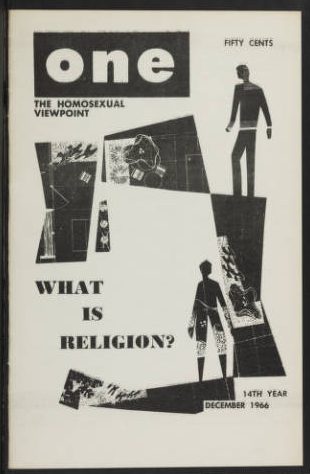 This is the eighth in our series of ONE magazine cover stories.

It’s not so surprising that the first gay publication should explore the topic of religion: After all, where does homophobia originate if not in the pages of the Old Testament and the pews of so many churches to this day?

What’s surprising is that a Catholic Archbishop — Rev. Geoffrey Peter Thomas Paget King (an archbishop-sounding name if there ever was one) should participate in the conversation, and issue a call for inclusion way back in 1966.

Paget King’s essay, “The Church and the Homosexual,” outlines what many of us have since come to understand about the biblical injunction against same-sex relations: It was written in a time when the Jewish nation desperately needed to bolster its numbers, a time of sexual chaos in general. Thus, any act of non-procreative sex was frowned on. Paget King freely admits his own church’s mistakes through the millennia, and candidly admits the hypocritical thrust of its obsession with sex:

By now the religious leaders were going to war with their brethren, amassing wealth, claiming usury, and generally committing most of the sins condemned by Christ. Lest their followers should criticize them for this, it was essential to divert their attention from these things by fulminating against their sins — and from then on any sexual sin was utterly condemned; sexual sins, in fact, became almost the only sins.

Now, a good half dozen mainline Protestant denominations not only accept LGBTQ parishioners — they ordain them. That number can only grow. One day, even Paget King’s strict Catholic Church will have no choice but to follow along.