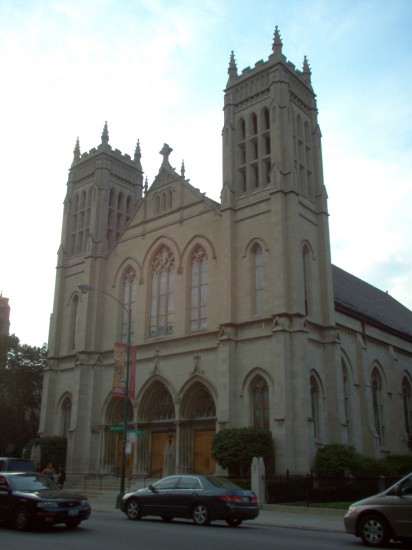 It’s the Catholic Church vs. the gays (again) as Chicago’s annual pride parade is being rerouted next summer past a 125-year-old house of worship. The new route—chosen by the city to help alleviate overcrowding—will take the June 24 parade along Belmont Avenue, right past Our Lady of Mount Carmel Church. And the local clergy are raising a holy furor about it.

They argue that the march—which is also starting earlier this year, at 10am, to curb drinking–will disrupt Sunday Mass and block parishioners from entering the church.

In 2011, the parade played host to a record-breaking 800,000 people and seems to grow even larger next year. Church representatives, who say they might have to suspend Sunday masses for the first time in nearly 100 years, are circulating petitions urging the city to change the route and start time once again.

You’d think Our Lady would be down on the parade on moral grounds, but Rev. Thomas Srenn, the church’s pastor, says otherwise: “Many of our parishioners will be at the parade and some will be in the parade,” Srenn told the Chicago Tribune. “The parish reflects all that diversity. It has nothing to do with the theme of the parade. The change of route and the time brought it right in the heart of our sacred time.”

On the Mount Carmel website, a parish statement touts the Pride celebration as “one of the hallmarks that make Lakeview unique,” and says the petition only reflects their “concern that the impact of the new route and time would have on the ability of people to participate at Sunday morning Masses.”

Wonder if Srenn and his flock would raise such a fuss if it was a St. Patrick’s Day Parade marching down Belmont?

Parade coordinator Richard Pfeiffer told the Tribune that there were three churches along the old route, with no complaints or disruptions. He added that barriers could be set up in front of the church so that parishioners can make it inside.

“The pastor has not emailed or called us,” Pfeiffer told Fox TV 32. “This church has multiple Masses, so maybe a compromise is that they come to an earlier Mass?”