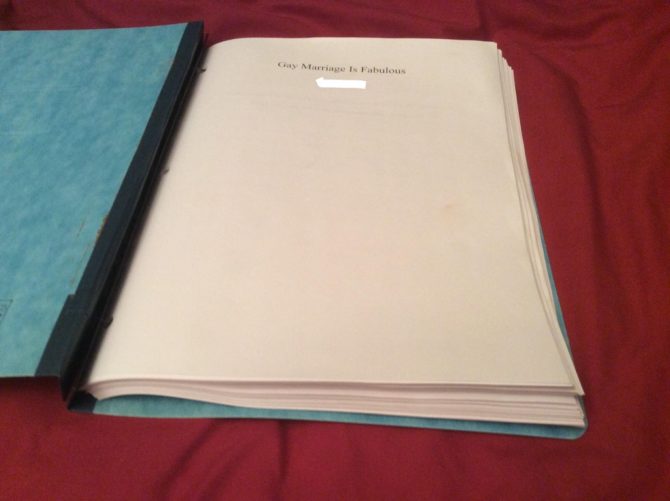 Whatever the custom, this teenager who attends a Catholic high school deserves all the accolades, and perhaps some scratch-and-sniff stickers, because who doesn’t love those?

The 11th grader, who goes by averagesmurf, was asked to write a paper defending the morals of one of the church’s teachings.

“The assignment is to write a ‘Summa Theologica’ style paper where you present a ‘moral dilemma,’ which is where you give the objections to church teaching and then the replies from the church. The exact words my teacher said in class were that you have to provide the church teaching to ‘show and prove that the church’s position is right,'” the student writes on Reddit.

Instead he turned in a 127-page whopper of a paper, simply titled Gay Marriage is Fabulous.

Here’s how things escalated, in his own words:

In terms of what she (the teacher) went over in class, we had a whole class were kids asked anonymous questions about moral issues and then we discussed it in a large group, afterwards the teacher would provide the church’s teaching and “correct” what we said in our discussion. Then she would move on before we got to put another word in.

When the issue of “why is the church so against gay marriage” came up, I asked for the little “talking ball” and just started going for like 15 minutes on how the bible isn’t a condemnation of homosexuality and in all ways affirms love rather than hate and how god doesn’t make mistakes when he makes us, we are who we are. After which, when she started quoting Aquinas on natural law, I stood up and said that natural law has no basis in scripture, science, and fails the is-ought fallacy presented by David Hume and is bases heavily on divine command theory which fails the euthyphro dilemma. Then I went on about how, when conceiving natural law, Aquinas bases his argument on a law by the Byzantine emperor, Justinian, who wasn’t very intelligent and believed gay people caused “famines and pestilences”.

The bell rang at this point, which did not provide her an opportunity to “correct” my statements. However, in the next class, she changed the format of the class. She did not allow discussions and showed a video the whole class (link). The video insinuates that homosexuality is basically a choice or something caused by abuse and “unhealthy relationships”. Furthermore, during class she’s spouted off standard, conservative bull-sh*t arguments like the “sanctity of marriage”, “gay = aids”, “gay relationships are unhealthy”, “kids need a mom and a dad”, “Gay men are much more likely to be pedophiles”, etc.

When you do actually bring up significant arguments against the church, she vehemently steers around the question and avoids the answer. For instance, in class, when we we’re talking about “gay = pedophilia”, i said that there was no evidence nor science to back the claim up, but rather much to discredit such a laughable theory. Furthermore, I went on to say that the only people who have higher rates of pedophilia are priests who molest little boys. Her response was, “is that a fact? or is that just something the media wants you to believe.” She went on to totally deny that priests had ever molested children.

Many were quick to cry foul, questioning whether the story was made up. 127 is an awful lot of pages, after all.

In a separate response titled “I know people are just going to hate on me, but here’s the full paper,” the student provided a link to the full text, which we will ever-so-happily share here.