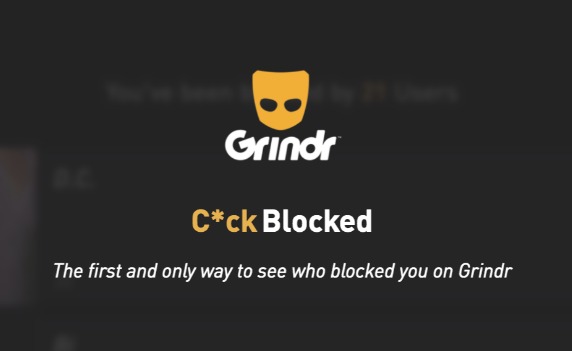 Last week we told you about C*ckblocked, a new website that lets users see who’s blocked them on Grindr. The site was developed by Trever Faden, a tech professional from Washington, D.C.

“I discovered that Grindr actually gives each user the profile IDs of all the users who blocked you on the app,” Trever told Queerty. “They don’t display it anywhere on the actual app itself, but the data is there.”

“So, I decided to build C*ckblocked. Basically you can login with your Grindr creds and it’ll show you all the users who blocked you on the app.”

Matthew Rodriguez over at INTO asked Grindr users to share their experiences using the new tool. While many found it to be a silly distraction, Rodriguez noticed a sad pattern reported by many men of color.

Most of the men who had blocked them fell into the same category: white dudes who had they had never spoken to.

One user said he was blocked by over 700 guys, the majority of whom were white strangers.

“This site serves as a reminder that, while there is blatant racism on dating apps, there’s also a lot of covert ways—microaggressions, if you will—that people can show their discrimination,” Rodriguez writes.

Check out some of these tweets…

I’ve heard a lot of WGM use the block button liberally, but let’s see if white gay men are really trying to make their digital space whiter.

Oh how funny. Mine is about 10% people I know, 10% people I messaged, and the rest are strangers. Of the strangers, about 75% of them are white and at least half of those are the headless buff torso variety.

lmao all 63 of the dudes who blocked me on grindr are ugly, well known racist gays in philly, no surprise lmao

Mine is literally like 90% white or white passing guys but Boston is also very white, especially on Grindr so ????

it’s mostly just white guys who block POC liberally so that grindr looks whiter for them tbh. i had the same thing