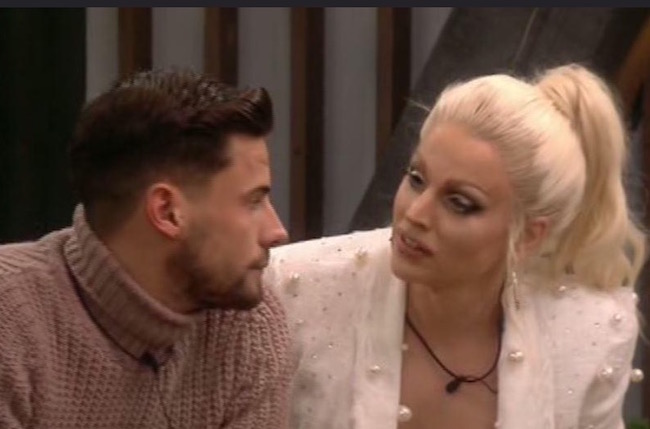 The people who care about things like the Celebrity Big Brother are up in arms about the burgeoning relationship between Andrew Brady and Courtney Act, particularly since Brady let a comment “slip” about Courtney’s penis.

Talking to housemate Rachel Johnson, he said, “If Courtney didn’t have a dick, I’d go to town on that.”

This “revelation” comes after Brady and Act bathed together; a tableau that found Courtney diligently shaving Andrew’s feet. And let’s not forget the time Courtney pulled down Andrew’s pants. There have been a lot of laffs so far.

Related: This ‘Drag Race’ star is about to be thrown into ‘Celebrity Big Brother’ with an antigay politician

The most recent episode also features Act waxing Andrew’s butt as only buds can, while two other contestants watch.

The @courtneyact salon is now open! No surprise who the first customer is… ? #CBB pic.twitter.com/DPbMCfjCdE

Minions of the Twitterverse became outraged as one, venting their frustration with life and pop culture on social media.

Some didn’t appreciate the comment about not having sex with Courtney because she’s in possession of penis, while others think Andrew is just leading Courtney on, because… well, it’s a contest on the TV.

“if courtney didn’t have a dick i’d go to town with that”
oh andrew sweetie you still would if the cameras were off#cbbuk #cbb #cbbandrew pic.twitter.com/ZMG6LdENQt

Andrew “If Courtney didn’t have a dick, I’d go to town on that” #CBB pic.twitter.com/5fSDHDdGMN

If Courtney didn't have a dick I'd go to town on that. Just when you thought you couldn't dislike Andrew any more… #CBBUK

In Other Things On Celebrity Big Brother that upset Twitter: Theoretical funnyman Dapper Laughs called two girls “fucking lesbians” because they didn’t want to have sex with him, which by that logic probably makes us lesbians as well.

Dapper asked model Jess Impiazzi and Ashley James of Made in Chelsea who was more likely to fornicate with his personage. Cagily, they pointed to each other.

Hence, he called them “fucking lesbians.”

CBB viewers are getting a bit sick of Dapper Laughs' 'banter'