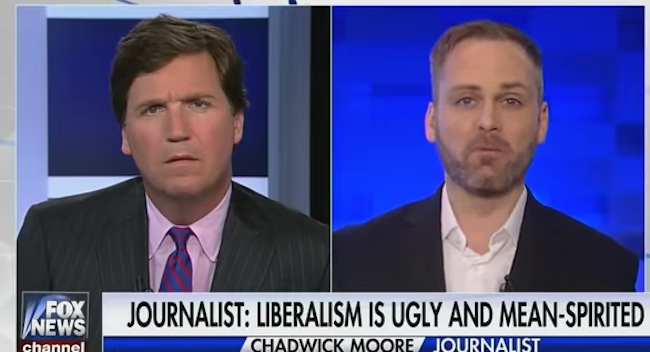 On Monday, we told you about Chadwick Moore, a gay journalist who’s found himself on the receiving end of a backlash over what many saw as a puff piece on Milo Yiannopoulos.

In a much-maligned New York Post story last weekend, Moore “came out” as a conservative in response.

Now, because negative attention can be a powerful drug, he’s made an appearance on FOX News.

Tucker Carlson describes him as “a gay journalist in Brooklyn” who “has done just about the bravest thing a gay Brooklyn journalist can do: he abandoned trendy lifestyle liberalism for something else.”

After painfully joking that he “left his scarlet letter at home,” Moore tells Carlson that gay liberals have “uncontrollable paranoia” when it comes to conservatives, and claims “journalists are terrified of these people.”

Moore argues gay people no longer have critical thinking skills, nor are they interested in viewpoints that don’t align with their own:

It’s death for gay people….I’ve also said that gay people are natural libertarians because we’ve existed so many times or for so long throughout history outside of acceptable society that the one thing we’ve always wanted was to be left alone by the government and by our neighbors essentially. And now the left has become completely puritanical and it’s completely off-putting.

There will be side-eye.