Charles Rogers, the 32-year-old writer/director, first made a splash with his film school buddy and longtime friend Sarah-Violet Bliss with their debut feature Fort Tilden. The film earned wide praise for its send-up of Millennial culture and for its savage sense of humor, and won the Grand Jury Prize at the SXSW Film Festival in 2014. Its popularity led to another opportunity for Bliss and Rogers to satirize the Millennial generation: the dark comedy Search Party, starring Alia Shawkat.

Search Party centers on Dory (Shawkat), her boyfriend Drew (John Reynolds) and their bubble-headed friends Elliot (John Early) and Portia (Meredeth Hagner) as they search for a missing friend. What begins as a goofy mystery becomes a crime thriller, as Dory and her friends fall into a world of cults, crime and social media narcissism.

Season 2 of Search Party ended on a cliffhanger, with Dory arrested and accused of murder. Season 3, which comes to HBO Max this week, picks up with Dory on trial, and her friends scrambling to prove her innocence. As with the previous two seasons, plenty of savage humor abounds as the plot takes some disturbing twists.

We caught up with Rogers to chat about the new season, his influences, and the future of the series. Search Party returns to HBO Max June 25.

So this show is bizarre in the best possible way. Season one plays like Scooby-Doo written by Tom Wolfe. Season 2 is like a classic noir. Now you do courtroom drama in Season 3. I have to ask, how much of this did you have in mind when you started?

All we knew when we started was that we wanted to make a mystery in the world of Millennial satire. Sarah-Violet and I had made a feature called Fort Tilden, which was Millennial satire. So when we were figuring out how to turn it into a TV show, our producers Michael Showalter and our producers at Jax Media came up with what about a mystery? Immediately our minds split; it felt like a space we could easily explore. 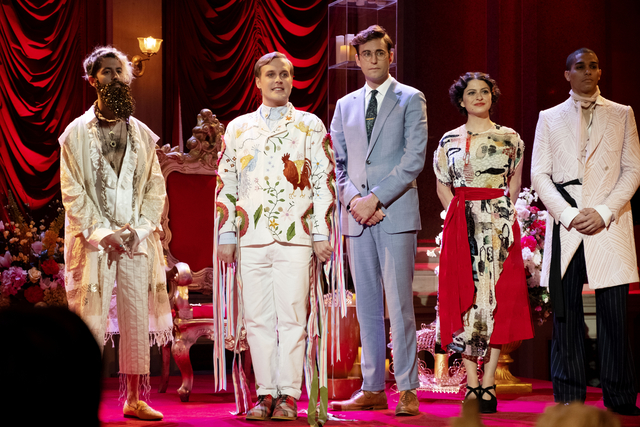 The way Season 1 ends, you find out that the mystery you were watching isn’t a mystery. So what did that mean for the show, and the genre? Between first and second seasons, we just realized the show was evolving, and that it keeps evolving. Based on where we land at every season, we’ve painted ourselves into a corner and then have to pay homage to a new genre. But we never expected that, and honestly, it’s a huge pain in the *ss when we start over.

I appreciate that though. It’s taking a risk; you’re not doing a formula show. You let the show evolve. That’s bold. This season really brings to mind the Amanda Knox case. Did you have anything you referred to?

Yes, Amanda Knox was an inspiration for this season. I don’t know if that’s a legal problem…

There’s an episode in this season that is supposed to be a 60 Minutes-style show that Dory goes on. It’s very inspired by Amanda Knox’s 60 Minutes interview.

Elliot’s story is also captivating this season. What’s kind of amazing about Elliot’s story is that it’s ridiculous, but I know people exactly like him. Narcissistic. Selfish. Manipulative. Kinda pathetic, but also someone you want to root for. How did his story evolve in your mind?

Well, we made the pilot independently, then sold it. So the pilot in some ways was a testing ground for us. I think the series as a whole is funnier than the pilot. So, in a sense, Elliot’s starting point was a bit more in the real world in the pilot. As the show found its tone, everyone heightened, but in a good way. A big part of it was [casting] John Early, and sinking into what people would love to see John do. Specifically, in the second season, when Elliot goes paranoid-insane and is manic, that was an excuse to take John all the way. All of the actors are the reason the characters are as colorful as they are. They each have a dynamism we want to bring out. Also, I’m surrounded by a lot of narcissistic gay men, and it’s an endless conveyor belt to make fun of them.

So when you write a character like that, who is meant to be obnoxious but still has to be likable on some level, how do you approach writing that? That’s a delicate balance.

A big part of the way I see people…I’m kind of paranoid as a human being. I’m always trying to figure out how people are going to hurt me. I’m sensitive that way. So I have a sense for people’s bullsh*t and people’s flaws and what I sense as their extremes. But I also feel like I understand people’s pain, and how that influences things they do. Writing “unlikeable” characters, you have to make sure people relate to where their pain is. People act absurdly, but not without reason. As long as you’re connected to that inner life, people are willing to go on the journey. You also have to cast really funny, special people. That helps too.

Absolutely. In Dory’s case, almost the opposite is true. She’s the one good person when we meet the characters in the first episode. Is this ultimately a story about how a good person becomes wicked?

This is a story about a person that wants to be seen as good, how someone lives the life of a good person until they find out more and more about their shadow side.

Some of that is intentional, some of that is unintentional. And in my mind, I’ve rewritten some of the first season to accommodate this idea that we’ve discovered as its evolved. A lot of the Dory you meet in the first season is genuinely really sweet, but also it’s a Dory that’s been sheltered from extremes and hasn’t come into contact with a lot. She doesn’t know what she’s made of yet.

Is Dory a sociopath? Or is she a survivor?

I see Dory as a symbol. Her psyche has been really flexible to accommodate lots of things we want to say about her. That can be frustrating in the writing room when people want to pin down decisions. At the same time, sometimes when you do that, you run the risk of sacrificing the disconnected aspects of people’s psyches in place of something easy to wrap your head around. I like how Dory has stayed a mystery to people. It gives us a chance to say more.

And the character evolves. That keeps it interesting.

This season you have some terrific guest stars, starting with Louie Anderson, Shalita Grant, Michaela Watkins who’s one of the most dependable actresses working. Did you write her part for her?

We wrote her character as a vibe, but with no particular person in mind. When we were casting, we thought of her. It was like oh God, say yes. She’s amazing. She’s great in everything, but particularly in Enlightened. Michael Showalter is friends with her. Sarah-Violet and I wrote on Wet Hot American Summer for her character. So there was this weird full circle there. Michael texted her…right as she was entering a national park and lost signal. She couldn’t reply for 24 hours.

So it was like nooooo! But truly, such a beautiful person. I really need her to be my friend at the end of this.

Put her name in the running for an Emmy. She’s a joy to watch.

Keep an out for Shalita Grant this season. She is a powerhouse.

People have no idea what they’re in for.

I loved her character and the little things she does. I noticed every time she introduces herself to someone, she strikes the same pose.

That’s all her too. She really found the character. We were like do all of that.

You co-direct a lot of your episodes with Sarah. We tend to think of a director as an authoritarian; one person calling the shots. How do the two of you find a working dynamic?

Sarah-Violet and I met at NYU at film school. When we decided to make a feature together, it was an incidental thing. Life is just really unpredictable. Six years later, I can’t believe we’re working on the fourth season of a TV show. It’s a partnership. Because we’re at the helm of all of it together, directing flows in and out of every aspect of the show. There’s something about directing the show that, because we write, produce, do all of it, it’s just a constant stream of work. It’s always conversational and about listening and doing what is best for the show.

Do you have solo aspirations?

Yeah. I went to film school with that intention. When the universe told me this was how it would be for a while, I said “Ok.” There are ideas I have that are on the back burner that I feel calling me louder and louder as time goes on.

Sarah-Violet and I are writing and directing a movie called Monster. It’s a monster movie. So that’s the next thing. Then there’s a TV idea that I’m eager to get off the ground.

You’ll have to come back. I’d love to talk about that too. But, where Search Party is concerned, I know Season 4 is coming. How much do you have worked out? What’s the tone/genre?

Right now we’re editing. Season is 1 a mystery, a Nancy Drew-esque story. Season 2 is a Hitchcock psychological thriller. Season 3 is a John Grisham legal thriller. Season 4’s genre hangs on the final moments of Season 3, so it’s a spoiler. I can’t really announce. But what I can say is that it’s the darkest, funniest season. It’s the most extreme. The gas is pushed all the way. There’s also some very fabulous casting that queer people will be excited about.

What’s the future beyond Season 4?

We have ideas. It’s a long road ahead, but we’re keeping options open. We’d never want to keep Search Party going longer than it needed to. We want it to always say something. Ultimately, now that we’ve made four seasons, this is a story about how Dory’s psychology evolves. It’s starting to make more and more sense to us as to what we’re trying to say about that. But we’d never exhaust that point and try to push our luck.

Good to hear. Last question, how are you celebrating pride?

Well, I have been living with my parents since COVID started.

I’ve been in the middle of Texas in the middle of nowhere seeing old friends at a distance, missing my LA life. I’m celebrating pride by really examining my origins and trying to get to the bottom of what my life has been, and who the people are that raised me, and accept all of it. I feel like I suddenly woke up and realized I’m an adult. I still have a lot of sh*t I want to figure out about myself so I can do whatever I’m supposed to do in this life.

When is Season 4 coming?