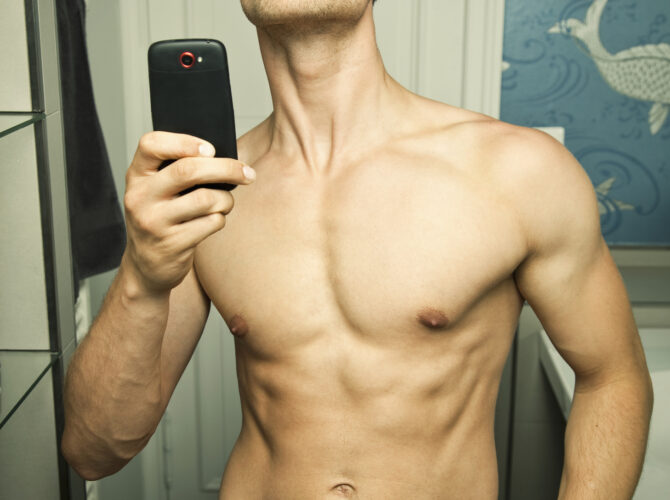 I’m a proud member of the headless torso club. I value my privacy and don’t share face pics unless I really feel like a hookup might happen. Recently I connected with another member of the headless torso club. He has an incredible body–toned arms, great butt, with just the right amount of hair on his chest, and he’s the perfect, um, “size.” We’ve been chatting for about a month. The other day he finally asked about trading face pics. I told him I would if he shared one first. So, he did. And that’s when I found it… it was my co-worker’s husband.

I’ve seen him a few times at different social functions–mostly at company holiday parties and once at a birthday dinner for a mutual friend. He’s a super nice guy in person, but he’s never mentioned being in a relationship online, and his profile says he’s single. So that’s weird. Also, my co-worker has never said anything about being in an open relationship, although that’s not exactly water cooler conversation.

So now I’m conflicted. I never sent him my face pic in response, so he has no idea it’s me. I could just ghost him. But he’s SUPER hot and the chatting has been fun. I would definitely like to hook up with him, but I don’t want to do something stupid that could lead to an awkward work situation, especially if my co-worker doesn’t know he’s being cheated on. It’s a lot to process. What should I do?

As the animatronic children scream over and over in one of Disneyland’s oldest rides, “It’s a small world after all.” And boy is that true! Especially in the gay world, where friends have hooked up with friends, you could run into your boss on the dance floor at a club, or an anonymous chest can suddenly turn into your co-worker’s husband.

The issue at hand here is boundaries. While it’s never a black or white situation, it tends to be less stressful, awkward, or dangerous if you keep your work and sex lives separate, especially when it’s as complicated as this one. If you were to go through with revealing who you are, and hooking up with the headless hunk, it might make things messy with your co-worker.

Even if he and his husband do have an open relationship, unexpected feelings may arise where your co-worker finds out what happened and ends up resenting you for having had a certain kind of “special” relationship with his husband. Open arrangements usually work when they are very regimented and contained, with rules or guidelines, and include structure and boundaries. This could be perceived as a boundary crossing, like you’re infringing on his personal space because you work together. And if he is cheating on his husband, and if it ever came to light that you were part of that, it might feel like a betrayal to your co-worker.

It’s important to keep your work life healthy, unspoiled, and positive, as your livelihood is at stake. It’s usually unwise to risk jeopardizing that when there are so many other rotating torso squares at your fingertips.

In this situation, I’d simply advise cutting your losses and not putting yourself at risk. You could let this guy know that as hot as you think he is, things have changed in your personal life, and you won’t be able to continue chatting. It’s telling the truth without telling the whole story and creating drama. You could also be the kind of person to just passively disappear and block his account. He’ll eventually get over it and move on. However, I tend to suggest avoiding the “ghosting” epidemic, and try to be more courteous about it. No one feels good after a ghosting, on either side.

The last (and probably best) approach is to go the direct and honest route. You could reveal who you are, and let him know that the wise thing to do here would be to end the flirtation and be friends, despite the temptation, as it’s best not to mix work and personal stuff. If you’re struggling with the idea of resisting what you know is probably best, it might be wise to talk to an understanding LGBTQ therapist about what might be going on for you internally.

There’s a reason the headless torso phenomenon exists, and that’s to keep things anonymous and separate from other areas of life. Don’t complicate things. Make a decision to respect your coworker, your job, and yourself, and keep scrolling.

Reach out to LGBTQ Therapy Space to schedule a free video consultation with an LGBTQ clinician. And don’t forget to follow us on social for LGBTQ mental health tips, and more!
Instagram
Facebook
Twitter