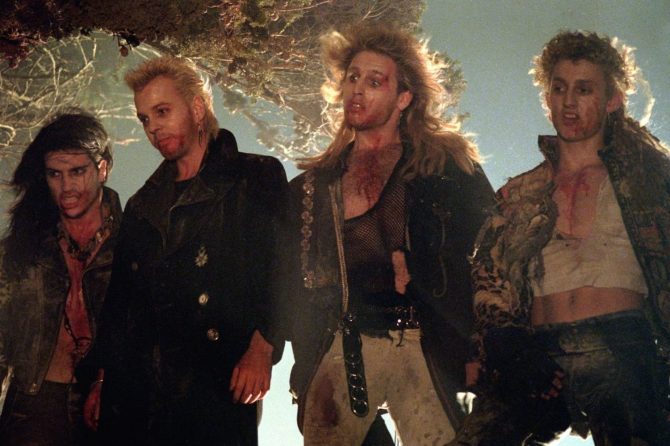 Sucking blood! Get your head out of the gutter, dear reader.

No doubt director Joel Schumacher, the openly gay helmsman behind The Lost Boys, had more than a little homoeroticism on his mind when he called action on this film. A hit in 1987, it helped launch the careers of its stars, Jason Patric, Corey Haim, Corey Feldman, Alex Winter & Kieffer Sutherland…not to mention landed them in ever teen heartthrob magazine at the time.

The plot: two teenage brothers move to a small California coastal town following their recently divorced mother. As the pair struggle to fit in their new community, they begin to notice strange happenings on the local pier. Michael (Patric), the older brother, falls for a beautiful young woman that hangs out with a creepy local gang. Sam (Haim), his younger brother, falls in with a  pair of occult-obsessed militants (Feldman & Jameson Newlander), who try to convince him that the small town is actually run by vampires.

The Lost Boys plays on many tropes that would become hallmarks of the period: latchkey kid mayhem, teenage horniness, and single moms falling for interloper boyfriends. It also pumps up the volume on the homoeroticism: the vampire gang, as led by Sutherland’s David, revels in their eternal youth and beauty, and seem less interested in women than in hanging out (at times, literally) together, often in unbuttoned shirts. The David-Michael rivalry also has some undertones to it: is David mad that Michael has stolen his girlfriend, or does he just want Michael for himself?

Creepy, sexy and loaded with a lot of tongue in cheek humor, a rewatch of The Lost Boys is a fine way to honor Schumacher, who died earlier this year. It’s also a fun way to welcome the witching season with a movie that knows just how gay it is, even if its characters don’t.