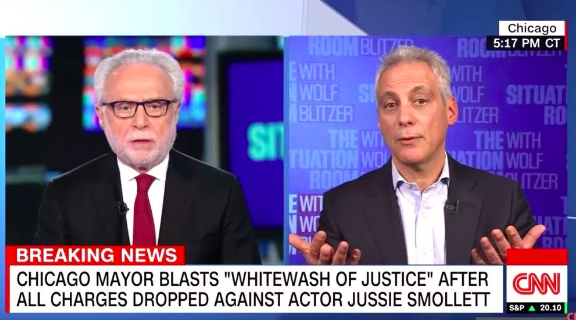 Chicago Mayor Rahm Emanuel appeared on CNN last evening to speak about all 16 charges against Jussie Smollett being dropped and–guess what?–he ain’t happy about it.

Right off the bat, Emanuel told Wolf Blitzer the case “makes no legal sense” then called it “an abomination of my sense of justice.”

“He went out and spoke on ABC to the country, as an African American and a gay man, about being the victim of a crime,” Emanuel said. “It was all a hoax and a moral violation.”

“He used the hate crime laws to advance his own career and he got caught.”

But Emanuel didn’t stop there.

“He’s walking around like he’s exonerated, with no sense of remorse or contrition,” the mayor continued. “He gets off with two days of community service. He used those [anti-hate crime] laws and those sentiments that bind us together as a society, to promote his own career, and then he’s walking around as if he’s done nothing wrong.”

Emanuel then asked, rhetorically: “If he wasn’t an actor, do you think two days of community service would be enough?”

“[If] we found out I put [a swastika] on the door for … my own career or you for your own career, … do you think two days of community service [and] the slate would be clean?”

Emanuel concluded by saying: “The fact is he’s walking away, no remorse, no contrite, doesn’t believe he did anything wrong and used the hate crime laws to advance his own career and got caught and his entire penalty become to society is two days of community service. It’s just not right.”