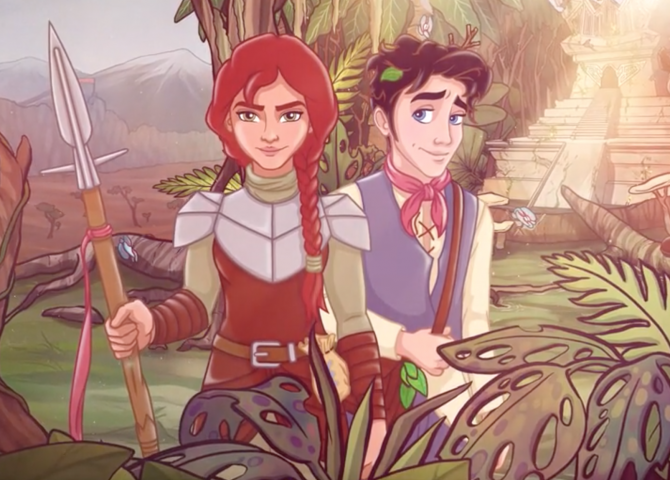 A New Zealand-based team of writers and illustrators are taking us back to the Promised Land — specifically, the Promised Land Tales series of LGBTQ-inclusive children’s books. Following the success of 2017’s Promised Land and 2018’s Maiden Voyage, the team has launched a Kickstarter to fund their third book, Raven Wild. The book, a fairy tale with a young trans woman saving the day, has already earned $18k toward its $27k goal within the first week of the campaign.

Related: These 10 books were challenged for their LGBT content (and are thus awesome)

“In Raven Wild, a reckless young boy named Hawk transitions into a courageous young woman called Raven,” the team writes on the Kickstarter page. “When Raven rescues an injured bird, she learns of an evil poacher’s plan to steal a precious gem… a gem with the power to control all creatures great and small! On her dangerous jungle quest to stop him and save an animal kingdom, a connection with a childhood friend called Finn soon transforms into love.”

By featuring a trans heroine, Raven Wild focuses on another shade of the ever-expansive LGBTQ spectrum — following Promised Land, which featured a gay romance between a farmer and a prince, and Maiden Voyage, which followed a lesbian couple embarking a high seas adventure.

On their latest Kickstarter page, Promised Land Tales co-founders Adam Reynolds and Chaz Harris detailed the importance of their quest:

“With Promised Land Tales, we’re creating the kind of children’s books we needed to see when we were kids. Through collaborations with authors of other queer identities, we hope to tell more ‘stories that never were, but that always should have been.’ In the Promised Land universe, all are equal — no matter their gender, what they look like or who they love. We believe it’s important for LGBTQ youth and their peers to see themselves represented in positive ways, where who they are is never questioned or used as a plot device or a point of conflict. Visibility in media is a powerful way to show young people they belong; if we don’t see ourselves in stories, we don’t see ourselves in the world. So join our expedition to bring a little more kindness into the world, because everyone deserves to live happily ever after.”

The team’s work has already been praised by Ian McKellen, who called Maiden Voyage “a beautiful book … from every point-of-view,” and George Takei, who said that entry in the series “breaks new ground in the arena of LGBT children’s books.”

The Kickstarter campaign for Raven Wild still has a month to go, and as of press time, there’s still the chance to earn an illustrated cameo in the book!