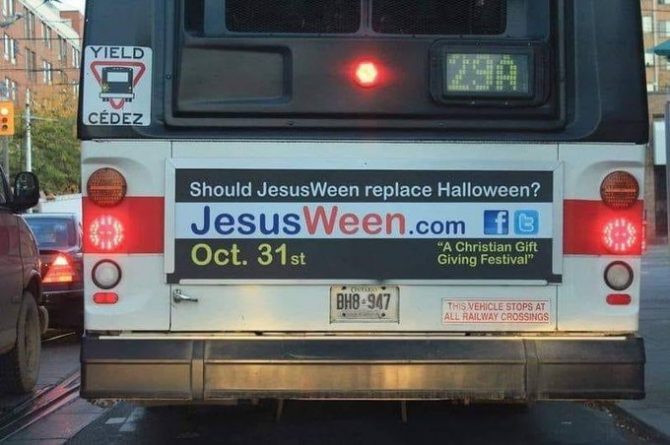 A group of Christian extremists are once again trying to co-opt Halloween (a.k.a. “Gay Christmas”) by turning it into “JesusWeen” and advertising about it on city buses.

No, this is not a joke. This is a real thing being led by some guy named Pastor Paul Ade, whose actually been pushing this “JesusWeen” agenda for a while now.

A photo of a “JesusWeen” advertisement on a city bus in Canada began circulating on Twitter earlier this week.

“JesusWeen is a God-given vision which was born as an answer to the cry of many believers who find joy in sharing the gospel with the unsaved,” the group’s official website states.

“The dictionary meaning of Ween is to believe and think. We therefore see October 31st as a day to expect a gift of salvation by receiving the Gospel of our lord Jesus.”

The god-fearing people behind JesusWeen say they want to do away with trick-or-treating, which they believe celebrates “ungodly images and evil characters”, and “use this day as an opportunity to spread the gospel” instead.

“JesusWeen has steadily grown and it’s expected to become one of the most effective Christian outreaches,” organizers say. “We will continue to work with Christians from different backgrounds on creative ways to reach our world with the gospel of our Lord Jesus Christ.”

…I beg your pardon??? pic.twitter.com/uH7V03lnKg

They really went with jesusween… do they really have 0 self awareness.

JesusWeen this, Peacocktober that, next you’re gonna tell me people want to fuck a pumpkin.

Let the power of JesusWeen embrace you and fill you with his love. https://t.co/QSiIS3fb9b

I am haunted by the JesusWeen bus.
The ghost of JesusWeen present, past, and future will be (i can't complete this sentence)

I only celebrate Jesusween.

ACCEPT JESUSWEEN INTO YOU, SAYETH THE WEEN AMEN