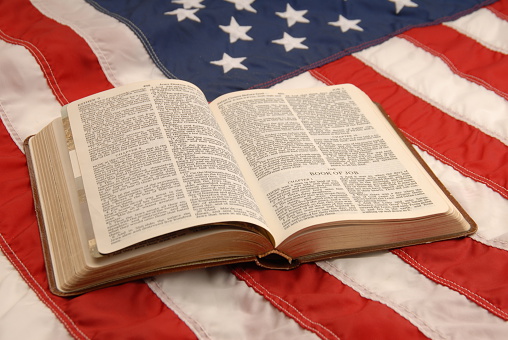 Christian extremists and at least one Republican member of Congress are not pleased that Donald Trump won’t be stripping away all LGBTQ rights in America with the stroke of his pen, BuzzFeed News reports.

Yesterday, Trump said he will uphold an executive order signed by Obama in 2014 which protects employees from anti-LGBTQ workplace discrimination while working for federal contractors… for now. Who knows how he’ll feel about it in another five minutes?

Now, in a statement to BuzzFeed News, “religious freedom” fighter Rep. Steve Russell of Oklahoma said, “I cannot understand why the President would prevent people of faith to continue to contract with the military.”

Ryan Anderson of the antigay Heritage Foundation agreed, saying Trump had “made a mistake” by honoring the nondiscrimination order, particularly because it makes trans people a “protected class,” which he believes is against God’s will.

“Many organizations, including faith-based groups, have beliefs about human embodiment that people are male and female — and that females and males are made for each other — and that the federal government shouldn’t penalize those groups when they operate according to their convictions,” he said.

Related: Trump Just Came Down Hard On The Side Of “Religious Liberty,” AKA Homophobia

“The fluid and subjective term ‘gender identity’ does not prevent discrimination in the workplace but rather injects in the workplace an agenda that is harmful to businesses and to other employees,” Staver said in a statement released Tuesday, adding that the “absurd” order’s protections “opens women’s restrooms to men” and force “businesses to be at the mercy of a person’s subjective and changing thoughts.”

Apparently, Starver would prefer to force all American citizens to be at the mercy of his own personal subjective and changing thoughts.