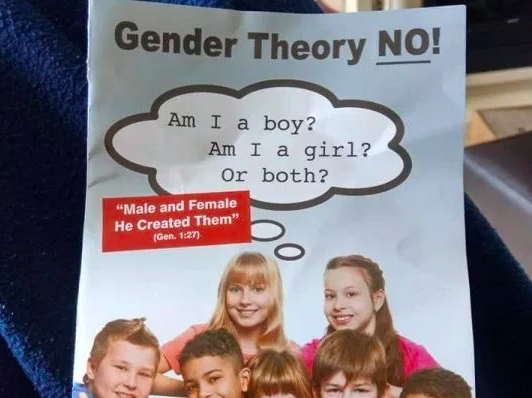 The pamphlet calls itself a “tool against gender theory” and warns that LGBTQ activists are actively imposing “anti-Christian and anti-God” views on school children. It also includes a picture… of Santa Claus?

23-year-old Janique James calls the pamphlets “wrong” and says she was shocked to receive one in her mailbox.

“Surely they have better things to do,” she tells Metro UK, adding that she’s “not surprised I’ve received it.”

“People have been protesting outside schools against sex education and LGBT+ education in the local area.”

The Tradition, Family, Property Association is an offshoot of the fringe group American Society for the Defense of Tradition, Family and Property, which was founded in the United States in 1960, before the Civil Rights Act of 1964 was passed.

When James shared a picture of the pamphlet on Facebook, her friend Rebecca Dawes Lea commented: “They are prolific in America protesting against abortion rights and gay marriage.”

“They are often called a cult. It’s the first I’ve heard of them on British turf.”

“The leaflet is going straight into the cat litter,” she says. “I’ve got no time for homophobia and transphobia.”