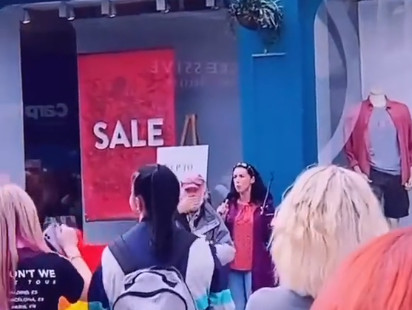 An angry Christian preacher tried to derail Pride celebrations in Belfast, Northern Ireland this weekend. Instead of kowtowing to her hate speech, the festival patrons shut her down in spectacular fashion.

Footage of the encounter landed on TikTok. It depicts the unidentified woman stopping on a street corner and shouting about evil lust, the abomination of homosexuality and how Jesus can cure queerness.

Instead of engaging the woman, the festival-goers just decided to crank their Lady Gaga music–the song “Born this Way,” naturally. They also launched into a spontaneous dance party.

Lmao get out #belfast #lgbtpride

“Seeing as it was Pride Day, nobody apart from the preachers had an issue with them being there, they were just having fun,” Lily Nezai, who captured the incident on TikTok video, told PinkNews. “I started recording because the way they kids handled it just by blasting Lady Gaga and ignoring her was brilliant.”

“I think the kids were fantastic,” Nezai added. “They didn’t rise to her. They just played their music and danced about and had a great time. As for the preacher, I think she was promoting a message of hatred and really giving Christians a bad name.”