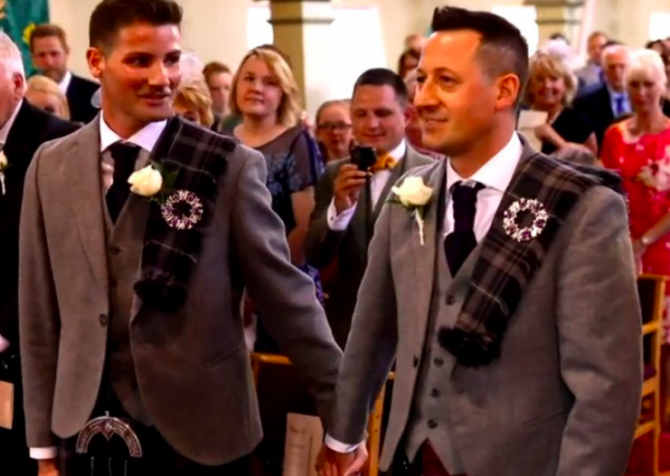 Songs of Praise is a Christian reality series that has aired on the BBC since 1961. It is one of the longest-running shows in its genre and features Christian hymns being sung in churches of varying denominations around the U.K.

This week, the show featured its very first same-sex wedding.

Jamie & Ian have married in a United Reformed Church thanks to its approach to same-sex weddings. They know it’s not agreed by all Christians, but tell @revkatebottley their own personal reasons. See more Sunday @BBCOne at 13:00pm and https://t.co/uNWTvEBrda #songsofpraise pic.twitter.com/FA1YPT6p9q

During the episode, Wallace’s mother said her son “always wanted to get married in a church” and that having his wedding featured on the show “means the whole world.”

“[His faith is] very important to him, ever since he was a wee boy,” she said.

This can’t be serious, a gay wedding on songs of praise. Don’t you read the Bible, or do you rip out the pages that may upset your lifestyle. Making a mockery of the church and on national tv.

I’m not an evangelical nor am I fan of this style of worship but here the BBC attempts to smear Hillsong Church for having pretty standard church teachings on homosexuality. This comes days after they featured a gay “wedding” on Songs of Praise.https://t.co/aBvX4l4UBM

Songs of praise has the worst modern hymns known to man, guitars, drum kits, gay weddings. No doubt pushed by a leftist/ liberal agenda. Horrid stuff, even by the standards of the BBC.

I’m not bothered about same sex marriage but surely when will they get fed up of forcing it down people’s throats. That is what sickens me, ok you’ve high jacked the wedding ceremony so bloody what! Get over yourself.

During the episode, the grooms reflected on the church’s oppression of LGBTQ love.

“Jesus preaches about love, inclusion, kindness, compassion,” McDowell said. “A good lady who comes to this church told us in one of our discussions, people will change, and don’t underestimate older people, either. They just need to think about it, and they’ll get there one day.”

“We didn’t want to carry on arguing about it,” Rev. Andy Braunston added, “so we decided to live with the difference.”

Speaking to the DailyMail, cast member Kathryn Jenkins says the show is slowly but surely reformatting itself to better represent the modern Christian faith.

“Today we do have our congregational moments but we show the different ways people worship,” she said “If you do that walking over mountains rather than in a cathedral, it doesn’t make you any less of a Christian.”

“It’s about adapting, making faith personal. Loads of my friends watch, most of them on iPlayer. I have one who enjoys it in the gym.”