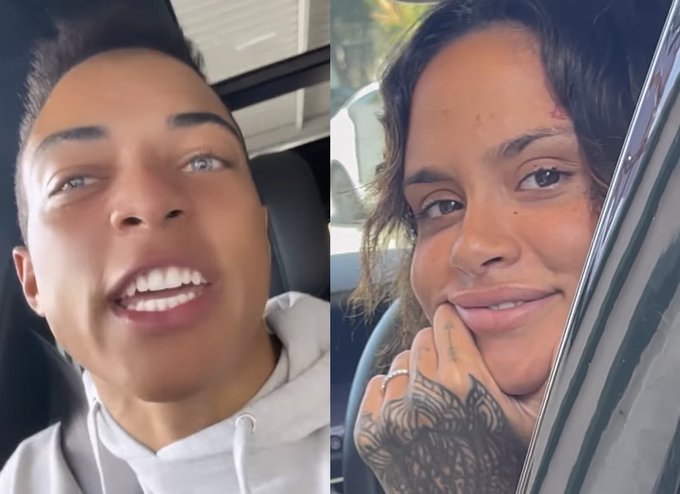 Living parody Christian Walker descended upon a Starbucks this morning and decided to make it everyone’s problem.

This “everyone” includes the person in the car ahead of him: nonbinary pop-R&B singer Kehlani.

Herschel Walker’s sole claimed heir initially stopped in the coffee shop’s parking lot to moan to his Instagram story that they had five Pride flags in the windows, but “not an American one.”

“Pride month is OVER,” Walker shouts. “You’re intolerant of how I identify as a frickin’ American!”

He then rolls up to the speaker and demands that they put up an American flag, saying that he will deliver one to the location himself if he has to.

When he gets closer to the window he sees an American flag with rainbow stripes, which sends him into an absolute spiral.

“You only GET a Pride month because you’re in AMERICA,” he tirades.

It’s when he overhears the person in the car ahead of him assuring the baristas not to worry since it’s “just that a**hole from TikTok” that Walker gets out of the car to berate them.

When he approaches their window, we learn that the “loving, tolerant, inclusive” person in his story is actually “Good Thing” singer Kehlani.

Christian Walker got out of his car at a Starbucks drive through and stepped to Kehlani out of all people omfg pic.twitter.com/UD5vRAVTcj

“Get your drink and go away,” Walker rants. “I’m entitled to an opinion like everyone else.”

Kehlani just stares at him with a sly smile, looking notably unbothered.

Honestly, most of the social media attention on the confrontation is just people being reminded how great Kehlani looks:

Why does Kehlani always look heaven sent?! she in line at the drivethru on a Wednesday afternoon, got no make-up on & somehow always look perfect 😩 pic.twitter.com/8sDw1jM0Cj

The next slide of the right-wing mouthpiece’s Insta story states, “I was just listening to a Kehlani song yesterday. Sister girl didn’t know who she was dealing with.”

It sounds like Walker’s a fan, and his feelings got hurt that the feeling is not at all mutual.