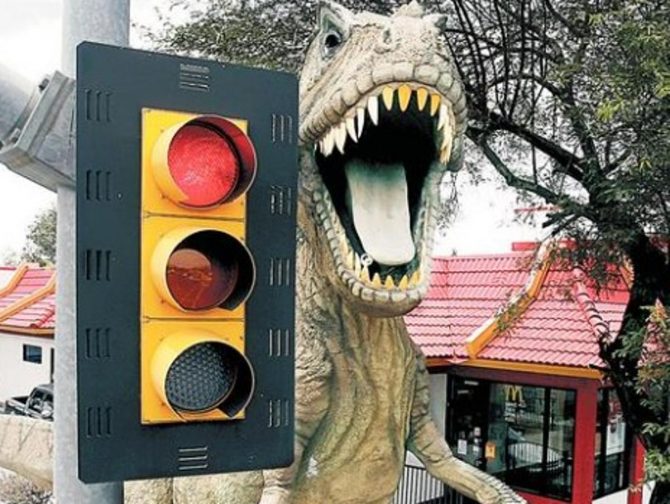 An online group called Christians Against Dinosaurs has denounced a popular T. rex statue that sits outside a local McDonald’s restaurant in Tucson, Arizona and is calling for its removal.

“Please help! This McDonald’s has this dinosaur and refuse to remove it!” the group recently posted on Facebook. “This is in Tucson, Arizona. Call the manager and demand the removal of this blasphemy!”

The post also included the restaurant’s address and phone number.

OK, so what the hell is Christians Against Dinosaurs anyway?

Well, according to its official website, is an anti-dinosaur group that does not believe the pre-historic reptiles ever existed. Instead, they think they are a hoax cooked up by scientists, possibly as a liberal plot against religion.

If atheists truly valued science and reason so much then why are they so threatened by where our investigations might lead?

Posted by Christians Against Dinosaurs – CAD on Monday, August 31, 2020

Is the group real? Is it a parody? Nobody knows for sure. But they insist they’re 100% serious and that they 100% want the T. rex taken down, damn it!

“Yes, the dinosaur should go,” group member and Tucson resident Josh Brown tells the Arizona Daily Star. “Unless they’re willing to compromise with a plaque of some kind stating that it’s a fictional character.”

A spokesperson for Christians Against Dinosaurs adds, “We’re fed up with everybody acting like the people of Tucson are imbeciles and we want to help. Having a big dinosaur outside a cultural hub like McDonald’s makes Tucsonians look like they’re mentally deficient and that isn’t right.”

The group also took offense at claims it’s meant to be satirical, insisting that they are not science-deniers. They just do not believe in dinosaurs, OK?

“We simply recognize that dinosaurs are not supported by anything scientific,” the group wrote. “They’re a parlor game that got out of hand.”

Posted by Christians Against Dinosaurs – CAD on Friday, August 21, 2020

A spokesperson for the McDonald’s franchisee, Dias Management Inc., says the dinosaur, which was installed in 1994, right around the time of the first “Jurassic Park” movie, isn’t going anywhere anytime soon, calling it a “Tucson landmark.”

Related: He asked out a McDonald’s cashier and set off an Internet debate