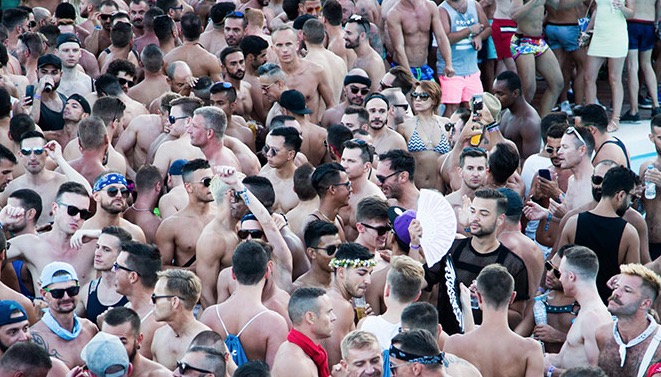 The XLSIOR festival in Mykonos, Greece is supposed to be a place for muscle queens flush with disposable income to come together and lovingly bump into one another’s sweaty shirtless torsos while club remixes pulse through the warm, open air.

In other words: Heaven. Or hell. Take your pick.

But the circuit euphoria was dealt a blow during an outdoor afternoon gathering when two partiers got into a brawl on the dancefloor.

As a remix of “Never Enough” from The Greatest Showman thumps along, a sea of perplexed and indistinguishable attendees looks on.

The whole thing is rather embarrassing to watch, so without further ado:

“It continued on outside for another 20 minutes,” shared one commenter. “I witnessed it first hand while I was outside too. Interesting that gays fight like this. This happens mostly among straights.”

Another wrote: “Aggression does not equate masculinity as some comments seems to suggest. This at a gay function is not the look. Matter of fact this entire display is beyond disappointing. I expect better from the gays. Leave that B.S display of aggression to idiotic straight boys… Also venue capacity shouldn’t be an excuse either, because I’ve attended wall to wall gay parties for years (TRUST ME) & this sort of thing hardly, ever happened.”