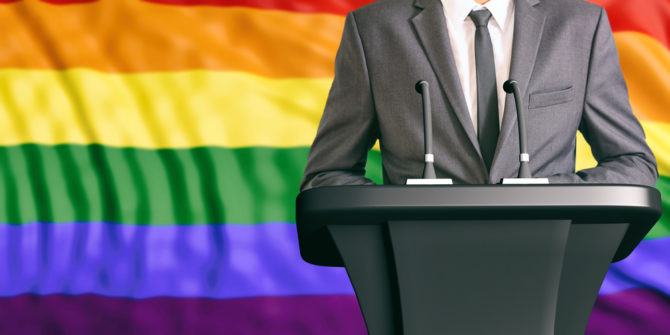 While being LGBTQ is absolutely totally 100% awesome, most people would agree that it’s not exactly an asset if you want to run for public office. Still to this day, queer politicians have to jump through a lot more hoops than their heterosexual counterparts, even as we’ve seen huge advancements toward LGBTQ equality in recent years.

But a straight candidate running for city council in Tijuana thought that being queer might help give him the edge he needed to stand out in a crowded field. So he lied and said he was bisexual. Now, he’s been slapped with a lawsuit for misleading voters about his identity.

Teresita Díaz Estrada, a local LGBTQ activist, says candidate Alejandro Cabrera Acosta signed a document saying he is bisexual when, in fact, he is not.

“He said in a meeting that he didn’t realize that he had signed and claimed to be bisexual and that it led to a big fight with his wife,” she tells Border Report. “If you’re not bisexual, you can’t say you’re part of the LGBTQ community.”

Acosta’s claims that the whole thing was just a big misunderstanding and that he never meant to say he was bisexual also don’t square with his campaign slogan, “Juntos haremos historia por Baja California,” which translates to “Together we will make history for Baja California.”

Díaz Estrada says that she believes he intentionally lied about his identity because he thought it would help boost his election chances. But all it really did was “steal someone’s place from a minority group.”

“This is committing fraud against a vulnerable community that has been victimized for a long time,” she said, calling Acosta’s actions an “abuse.”

According to Díaz Estrada, 10 of the 28 candidates running for office in Tijuana have publicly said they support the LGBTQ community, but so far only one has falsely claimed to be a member of that community.

Acosta hasn’t issued any comment since being outed as straight.