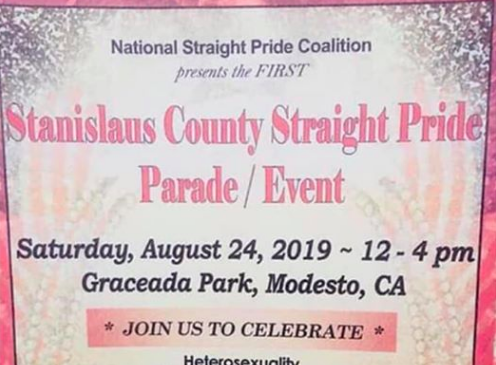 Proving that hope does exist in the universe, the city of Modesto, CA has blocked plans for a Straight Pride event.

The city council voted to block the event August 9 after the organizers of the event could not provide proof of insurance to hold the rally at a local park. The Pride event itself would have taken place August 24.

Opposition to the event welcomed the cancellation. Critics of Straight Pride have noticed the group’s open hostility toward LGBTQ people, as well as ties to white supremacist organizations.

Matthew Mason,  son of Straight Pride organizer Mylinda Mason, became one of the event’s most vociferous critics. “I am in a unique place to call her out for where she’s coming from, which is white supremacy, and I did not feel like I had the right to stay silent,” Matthew Mason said in an interview. “Mylinda constantly talks about revisionist history, but really her style of history is the one that’s revisionist.”

Furthermore, during the debate over the event during a city council meeting, Straight Pride organizer Don Grundmann made a massive gaffe while defending the event, when he referred to it as “a totally peaceful, racist group.” The admission triggered chaos in the meeting, as even the city council members struggled to stifle their laughter.