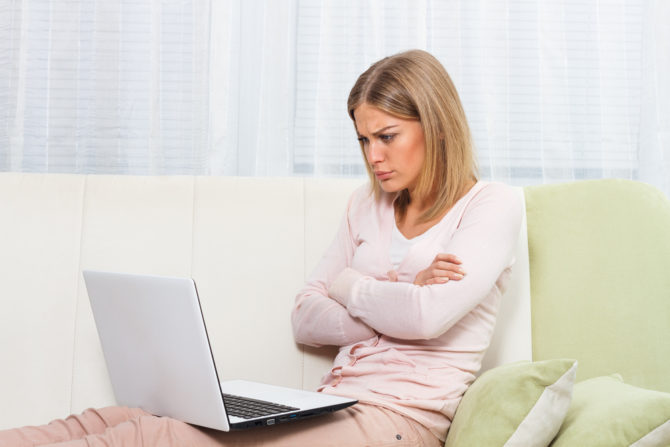 A woman is at a loss for how to handle her trifling boyfriend, so she’s seeking advice from “no-nonsense agony uncle” Brian O’Reilly.

In her letter, the woman explains that she and her boyfriend have been together for about five years, though they recently split up for a time after she made a shocking discovery on his computer.

“One day when I was cleaning his email inbox for him I discovered emails between him and another man,” she says.

OK. Let’s pause right there for a moment. Cleaning his email inbox? Is that even a thing?

“It didn’t take long reading them to figure out him and this man had been having sex. I was shocked and heartbroken. There were emails going back at least two years, back to the start of our relationship.”

As she read on, she was stunned learn the man her boyfriend had been chatting with wanted to introduce him to his family. Clearly, he had no idea she even existed!

But it doesn’t end there.

As she continued her sleuthing, er, “inbox cleaning”, she made another truly heartbreaking discovery.

“He had joined countless dating websites describing himself as gay on his profiles and had been posting messages looking for gay sex on forums.”

When she finally confronted him about everything, she says her boyfriend insisted he’s straight and that he no longer sleeps with men.

“I know this to be nonsense,” the woman says. “I’d forgiven him countless times for cheating with women but this was too much. He has never had any remorse for his actions.”

Now she wonders: “Do I keep trying to make things work?”

He, too, takes issue with the woman’s “cleaning the inbox” claims.

“You were snooping, plain and simple. And you shouldn’t have been,” he writes. “You didn’t stumble into his email inbox while attacking the laptop with your feather duster.”

Of course, that doesn’t excuse her boyfriend, who Brian calls “a serial, compulsive cheater and liar” and “toxic”, or his bad behavior.

“He sounds like a classic case of wanting his cake and eating it–he wants to have sex with anything with a pulse, but expects you to be the perfect housewife waiting loyally at home for him?”

Related: Woman shocked to discover husband has been soliciting online sex with men, wonders what to do

Brian continues: “There is nothing to salvage here–his behavior shows he has no respect for you, and he probably never will. This has been dragging on for a tortuously long time, you need to move on with your life.”

What do you think? Should she stick around and hope things get better, or is it time to kick this guy to the curb? Share your thoughts in the comments…