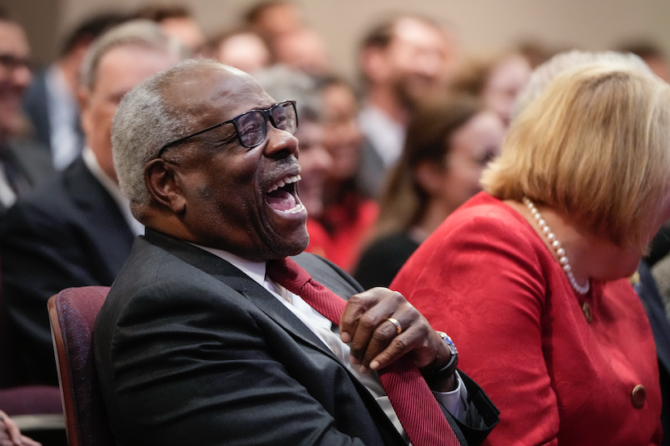 The Court’s decision to overturn Roe in favor of Mississippi in Dobbs v. Jackson Women’s Health upends nearly 50 years of precedent which allowed abortion until about 24 weeks of pregnancy. It’s expected that abortion will soon be all but outlawed in half the states.

After a draft opinion was leaked in May suggesting this outcome, many observers feared the Court could use the same process to target other rights.

It took all of minutes after the ruling was announced for those fears to be confirmed.

Thomas writes that the Court should reconsider other cases that fall under its previous due process precedents, specifically naming Griswold, Lawrence and Obergefell — cases which established federal protections for contraception, same-sex relationships, and same-sex marriage, respectively.

“For that reason, in future cases, we should reconsider all of this Court’s substantive due process precedents, including Griswold, Lawrence, and Obergefell,” Thomas wrote.

After wiping out the Constitutional right to abortion, Clarence Thomas says the Court should now 'reconsider' contraception, same-sex relationships and same-sex marriage. This needs to be amplified loud and clear before the midterms. Peoples' lives and rights are under assault.

Clarence Thomas explicitly states that contraception and gay marriage are next.

They’re trying to do it all. Clarence Thomas just filed a concurring opinion to Dobbs calling for the court to consider overturning the right to contraception, same-sex marriage, and privacy in the bedroom. Someone tell me what year it is.

With abortion knocked out, Clarence Thomas basically says the Court should come for same-sex marriage too. What about mixed-race marriage? What would Ginni Thomas say? As the product of a mixed-race marriage, I'm particularly interested.

Let us not forget that the SCOTUS will NOT stop here. Clarence Thomas and the GOP have already called to revisit right to contraception and same-sex marriage/intimacy.

Subscribe to Queerty for a daily dose of #politics #clarencethomas #obergefellv.hodges stories and more