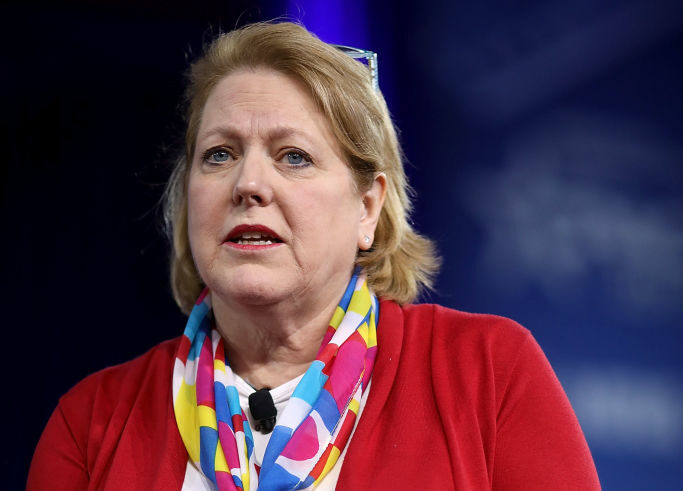 Ginni Thomas, wife of Justice Clarence Thomas, has had one hell of a week.

It started with calls for her to be investigated by the January 6 committee after it was revealed she signed a letter saying 11 Oath Keepers who were arrested for seditious conspiracy “have done nothing wrong.” And it’s ending with a damning exposé published this morning by The New Yorker.

The bombshell piece was written by Jane Mayer and is titled “Is Ginni Thomas A Threat To The Supreme Court?” (Fun fact: Mayer is the same reporter who shared that pathetic video taken inside the lobby of Donald Trump‘s failing D.C. hotel that went viral last year.)

The article accuses the 64-year-old, who believes “transsexual fascists” are ruining America, of using her position as the wife of a Supreme Court Justice to enrich herself and advance the extreme far-right agendas of her friends and clients of her lobbying firm.

It also reveals that, after flunking the bar exam in the mid 1980s, she joined a cult called Lifespring where members would routinely get together and fat shame one another in attempt to help each other lose weight. Or something.

Her parents helped get her a job with a local Republican candidate for Congress, and when he won she followed him to Washington. But, after reportedly flunking the bar exam, she fell in with a cultish self-help group, Lifespring, whose members were encouraged to strip naked and mock one another’s body fat. She eventually broke away, and began working for the Chamber of Commerce, opposing “comparable worth” pay for women.

Shortly after that, she met and married Clarence Thomas. And the rest, as they say, is history.

In the article, Mayer also details all the extreme far-right groups Ginni is closely associated with, including the vehemently anti-LGBTQ Christian legal organization First Liberty Institute, which currently has several cases before the Supreme Court.

Mayer also speaks to several law professors who offer their opinions on whether Justice Thomas can be an impartial judge in matters involving his wife and her colleagues.

NYU law professor Stephen Gillers calls the whole situation “reprehensible” and says Ginni has “hurt the Supreme Court and the administration of justice.” And Fordham law professor Bruce Green describes the Thomases as “a mom-and-pop political-hack group, where she does the political stuff and he does the judging.”

Why isn’t Ginni Thomas in jail yet?

"Ginni Thomas has held so many leadership or advisory positions at conservative pressure groups that it’s hard to keep track of them. And many, if not all, of these groups have been involved in cases that have come before her husband." pic.twitter.com/ziFQ7DNcDz

In 1985, Ginni Thomas sought counseling after she joined a cult called Lifespring, which tells me that a) she’s susceptible, and b) her counseling didn’t work.

I'm so glad Ginni Thomas and her creepy ass is trending again.

Ginni Thomas broke away from a cult in the 1980’s, only to fall into the same trappings again. She is damaged and dangerous.

Ginni Thomas is a threat too democracy

So is Clarence. He needs to be impeached https://t.co/790ETOLZw9

Imagine being a Justice on SCOTUS and having a wife who drunk dialed the woman you sexually harassed? And then imagine this same wife helped finance an insurrection on the United States Capitol.

Wow, only in America.

Worth noting that Mr. Ginni Thomas was the only SCOTUS justice to object to Trump admin docs being turned over to Jan 6th committee.
I mean, come on now.

That Ginni Thomas was a member of a cult that dance naked and #fatshamed each other as therapy was not what I wanted to hear😵‍💫 https://t.co/u97dHcGsVV

Hey, Hey … Ho, Ho … the Supreme Court got to tell Clarence Thomas he got to go.

Ginni Thomas has tainted her husband’s decision making, so Clarence Thomas no longer functions in an impartial manner.