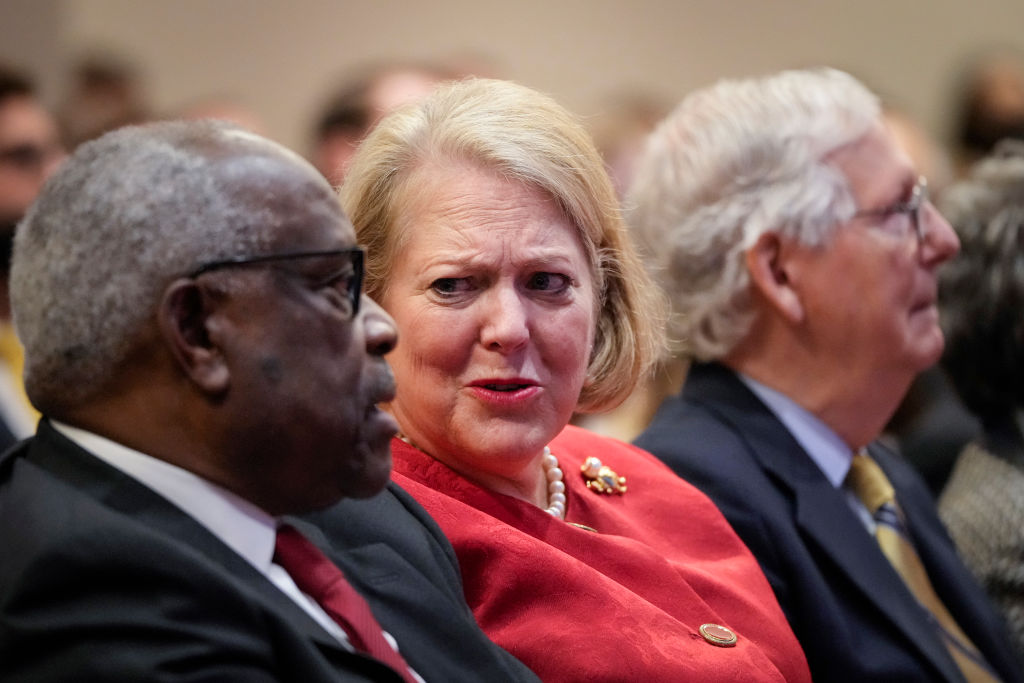 For someone who purportedly had absolutely nothing to do with last year’s insurrection on the U.S. Capitol, Ginni Thomas, married to Justice Clarence Thomas, sure seems to find herself at the center of a lot of news reports about the attack.

The far-right activist and noted homophobe made headlines last year when she took to Facebook on the morning of January 6, 2021 to voice her support for “MAGA people” rallying in D.C then later edited the post to say she wasn’t referring to the domestic terrorists who stormed the building, trashed the halls, and shit all over the floors.

A month later, she made headlines again when an email she sent to all of her husband’s clerks leaked to the press. In it, she apologized for whatever role she played in the deadly riots and begged them for forgiveness.

Now, she’s making headlines yet again, this time for signing onto a letter saying 11 Oath Keepers who were arrested for seditious conspiracy “have done nothing wrong.”

The letter, which was also signed by Tony Perkins, head of the anti-LGBTQ hate group Family Research Council, plus several other antigay extremists, rails against Rep. Liz Cheney and Rep. Adam Kinzinger, who both serve on the January 6 committee, for taking part in an “overtly partisan political persecution that brings disrespect to our country’s rule of law, legal harassment to private citizens who have done nothing wrong, and which demeans the standing of the House.”

Reporter Mark Joseph Stern shared the letter, which was published to the Conservative Action Project’s blog last month, on Twitter this morning.

As a result, Thomas has been trending all morning. Many are now calling for her to be subpoenaed by the committee to answer questions about her involvement in the attack and whether she funded any of the operations via her ring-wing organization Groundswell.

Ginni Thomas is trending. Must be some of that seditious conspiracy in the air….

Good morning ?? Ginni Thomas will be going through some things

Ginni Thomas is married to a Supreme Court justice who may very well be hearing the cases of seditionists that she supported and helped plan an attempted coup. Let that sink in for a minute.

Subpoena Ginni Thomas and the other failed coup cheerleaders pic.twitter.com/Lbcbj9dNSp

Good morning and Happy Tuesday to everyone who agrees that Ginni Thomas, wife of Clarence, needs to be subpoenaed for the role she played on January 6th.

When will Ginni Thomas be indicted? Does her husband who is sitting on the highest court in the land support his wife’s chumminess with the seditionists/insurrectionists? Did he help finance it with her?

It is deeply disturbing that the wife of a Supreme Court Justice is such a partisan hack that she even supports insurrectionists.

Ginni Thomas must be subpoenaed for her role in the Jan. 6 insurrection. Her husband, Supreme Court Justice Clarence Thomas, needs to recuse himself from hearing any testimony on the January 6 insurrection.

According to the political fact checking site PolitiFact, there is no evidence to suggest Thomas had any role in organizing the insurrection.