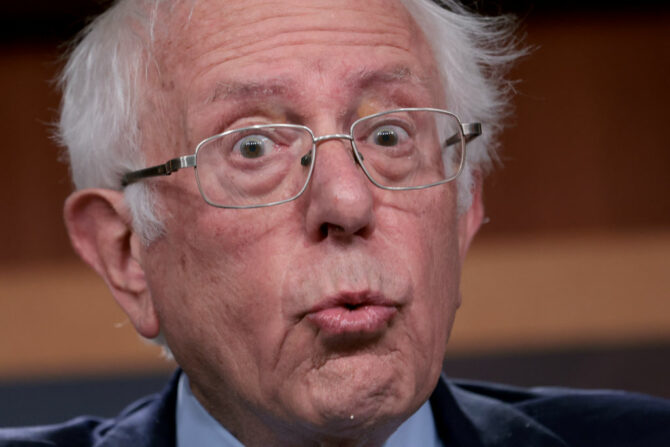 A leaked majority opinion written by Justice Samuel Alito shows the Supreme Court has voted to strike down Roe v Wade and all eyes are suddenly on Sen. Bernie Sanders.

While campaigning against Hillary Clinton for president in 2015, Sanders went on MSNBC’s The Ed Show to say that if Democrats really wanted to win over new voters they should focus less on protecting people’s civil rights and more on things that matter, like economic issues, since those are what truly bring people together.

Related: If Roe vs Wade is overturned, LGBTQ rights could be next

“These people are struggling and voting against their own interests,” Sanders said when speaking about white voters in the South. “Getting hung up on gay marriage, getting hung up on abortion. It’s time we start focussing on the economic issues that bring us together.”

“These people are struggling & voting against their own interests. Getting hung up on gay marriage, getting hung up on abortion. It’s time we start focussing on the economic issues that bring us together.” pic.twitter.com/L2UqLxY4a1

Now that Alito’s majority opinion has leaked, that clip of Sanders has begun recirculating on Twitter and folx are not happy with him.

I love receipts. Carry on

Marriage and abortion are both issues with economic impacts. It’s insane to act like these issues and economics are two separate islands.

Bernie Sanders is completely to blame for all of this.

And I will fight everyone about it.

Welp. There goes Roe v Wade. Thanks a lot, Susan Sarandon and Bernie Sanders. Is this your revolution?

It will be very hard for me not to blame Bernie Sanders and all his media for this. I’m sorry.

Normally I like to stay a smidge above that, but in a time where we needed focus he unleashed a wave of distractions which ultimately led to this conclusion.

Because those impacted by gay marriage and abortion laws don’t want to sell their rights for a better economy. It’s not a choice one should have to make.

Bernie Sanders is incredibly obsessed with “economic issues” for someone who hasn’t solved any economic issues in 40 years of being a congressman.

Remember when Bernie Sanders called abortion rights a “distraction” in 2016? I sure do.

Sanders responded to the leaked majority opinion last night by calling on Democrats to immediately end the filibuster and make abortion rights the law of the land.

“Congress must pass legislation that codifies Roe v. Wade as the law of the land in this country NOW,” he tweeted. “And if there aren’t 60 votes in the Senate to do it, and there are not, we must end the filibuster to pass it with 50 votes.”

Congress must pass legislation that codifies Roe v. Wade as the law of the land in this country NOW. And if there aren’t 60 votes in the Senate to do it, and there are not, we must end the filibuster to pass it with 50 votes.

Unfortunately, Sanders’ solution was dead in the water even before he suggested it. Eliminating the filibuster would require 51 votes and Democratic Sens. Joe Manchin and Kyrsten Sinema have already said they don’t support getting rid of it.

How can we end the filibuster with 2 Democrats voting against it?

Super glad you ran against Hilary Clinton and enabled this to happen. 👍👿

Do it then. It’s weird to me when MEMBERS OF CONGRESS tweet stuff like this. If anyone can do it, it’s literally you. Do it.

I agree with you on this but also remember when I was covering the 2016 election how you said Planned Parenthood was “Establishment” and also endorsed a couple of anti-choice candidates and claimed choice wasn’t the only issue, so…. there’s that.

Joe Manchin is pro-life, and I don’t see Susan Collins voting to end the filibuster.

Talk to Manchin or help Dems pick up seats in the midterms. Everything else is just hot air.

You’re in Congress. You can just go ahead and work on that, without announcing it to us.

I love ya Bernie but we don’t have 50 votes either.

If only you had encouraged your fan base to understand the 2016 vote was always about the courts.