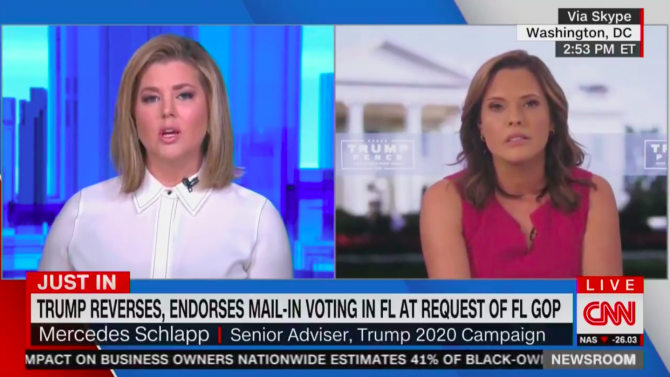 CNN host Brianna Keilar was not having any of Trump campaign adviser Mercedes Schlapp’s “crap” about mail-in voting earlier this week.

Schlapp went on CNN to argue that mail-in ballots lead to fraud (which, for the record, they don’t), to which Keilar replied, “It’s statistically insignificant. It’s not fraud, Mercedes. There is no evidence of fraud.”

“If someone were concerned about that but then they looked at the facts on mail-in and absentee ballots to fraud, they would see that it really doesn’t exist,” the CNN host replied. “Because, as I spelled it out for you, it’s statistically insignificant.”

According to the Brennan Center for Justice, there have been over 250 million ballots cast by mail since 2000. In 2018 alone, over 31 million Americans, or 25.8% of election participants, voted by mail.

Despite these enormous numbers, one study determined that the rate of fraud is roughly 0.0000001 percent, meaning you’re more likely to be struck by lightning than have your vote stolen.

Keilar continued, “You’re raising something that doesn’t exist. Why are you doing that? Because it appears that it’s just to sow doubt in the minds of people about whether their vote are going to matter.”

When Schlapp tried spewing some unsubstantiated nonsense about “the sake of America” and how voting by mail might result in ballots being cast three or seven days after the election, Keilar finally had enough.