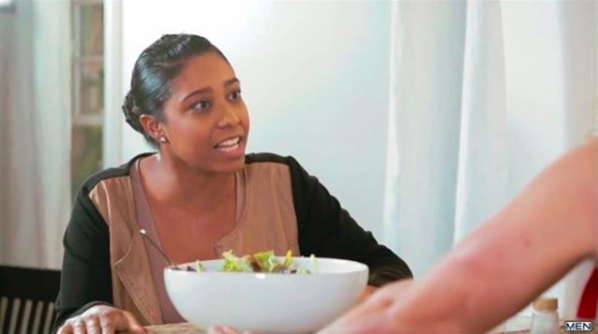 A gay adult scene that depicts two men dressed in aprons having in sex in front of a woman while she lunches on a salad has gone viral. When the woman realizes what’s going on, she becomes flustered and cries, “Are you serious?! Right in front of my salad?!”

We can’t show the NSFW video on our site, but you’re welcome to view it HERE.

The clip is from a film called Private Lesson Part 3 starring Jake Porter and Jaxton Wheeler. Shortly after clip emerged online, the term “right in front of my salad” began trending.

me: lol why is "Right in front of my salad" trending
Curious me: *looks it up*
Me when the screen loads: pic.twitter.com/E0mCPzUDKm

*makes the mistake of checking*

But it didn’t stop there. The clip also inspired some creative fan art:

Ana has always been put thru so much pic.twitter.com/L5N19Srh2A

right in front of my salad? pic.twitter.com/qsz7IeIpHh

But perhaps our favorite response is this R&B remix somebody put together. Seriously, whoever is responsible for this is an absolute genius:
http://adeleisonfire.tumblr.com/post/163694755582/has-this-been-done-yet

Naturally, everyone wants to know who the actress is that delivered the memorable line. Unfortunately, performer Jake Porter says he can’t recall her name.

“I think she’s definitely become the breakout and largely unexpected star of the scene,” Porter said. “Unfortunately, I don’t remember her name. She was an extra, local to the West Hollywood area where we filmed the scene.”

If anyone knows who she is, give us a holla@queerty.com

Subscribe to Queerty for a daily dose of #entertainment #rightinfrontofmysalad? #risque stories and more