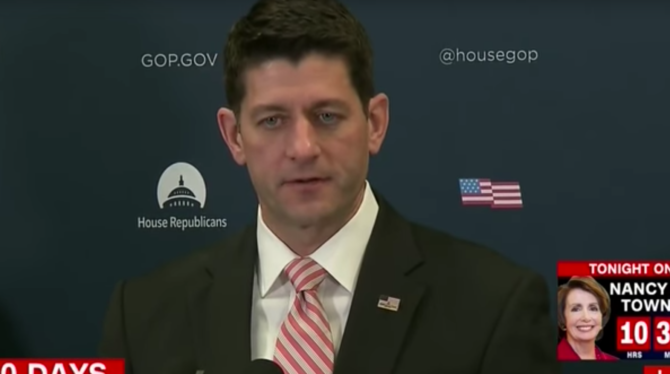 We can’t imagine being Paul Ryan right now, or for that matter, any other high-ranking Republican not in Trump’s immediate circle.

What must his daily routine look like these last couple of weeks?

Wake up, have a coffee, read the news, take some deep cleansing breaths, then go out into the world and defend whatever garbage Trump has recklessly flung at the world next.

Of course, the fact that Ryan agrees with most of Trump’s agenda speaks volumes, but he’s still left to deal with the chaos of it all.

And that’s to say nothing of the people who have to take in the steady stream of misdirection first hand and attempt to figure out what’s really going on.

During a Tuesday press conference about Trump’s travel ban, Ryan said he thinks, “it’s regrettable that there was some confusion on the rollout of this.” That’s one way of putting it.

After then speaking to when he was told about the President’s action, Ryan walked away from the podium and a voice now being credited to an unnamed reporter (though there is still a slim possibility it was Ryan) was caught saying “waste of my f*cking time.”

At least that’s how it aired on CNN.

Watch below — the obscenity can be heard at the 1:16 mark:

Update: An earlier version of this story suggested that the voice heard making the off-camera remark was Paul Ryan’s. House Minority Leader Nancy Pelosi‘s deputy chief of staff, Drew Hammill, who originally accused Ryan, has since deleted his tweet and apologized, saying he will “take [Ryan communication advisor Brendan Buck’s] word for it” that it wasn’t Ryan.