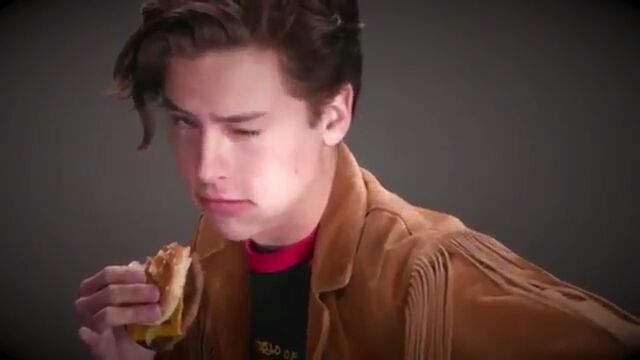 There are marketing campaigns, and then there’s this.

The very queer-friendly CW show Riverdale is about to become available to steam on Netflix, so one of the stars signed up to seductively eat a hamburger. And that, friends, is just sound and solid logic.

This precious, burger-loving angel will be coming to Netflix in 3 days. #Riverdale pic.twitter.com/uLFAL6IsWv

OK, so actually there is a reason here.

The show, centered around the characters of the Archie comic series, has had a notable lack of burgers compared with its source material.

Sprouse’s character, Jughead, is known in the comics as a particularly vacuum-esqe consumer of the ground meat product.

And that’s about all the reasoning you’re going to get. Satisfied?

The Internet, for one, is definitely satisfied:

Watching @colesprouse eat that burger makes me feel things that I don't understand.

That video of @colesprouse eating a burger really is it for me. I've peaked as an individual now. It's downhill from here.

@netflix @colesprouse This isn't sexy, this is funny af ??? Cole eats a ? on a NF promo but Jughead doesn't enjoy eating a burger on tv. That's false advertising?

If ur eating a burger and winked at me like how cole killed it I'll die pic.twitter.com/6KLtmeLkES

This is the most Jughead thing Riverdale has done. Jughead loves burgers, not girls. https://t.co/fsIevD12Xg

@michelledeidre dont you kink shame me

Whatever floats your boat, Cole. We support you.