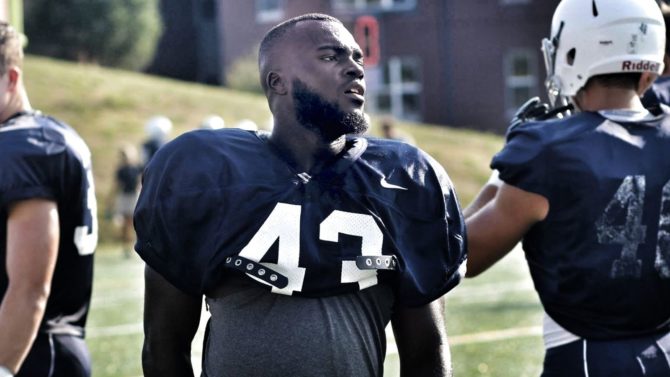 Xavier Colvin is a linebacker for the Butler Bulldogs at Butler University in Indianapolis. Earlier this month at a team event, he got up on stage in front of everyone, grabbed the microphone, and told his teammates he was gay.

“Afterwards I got texts and phone calls,” Colvin tells Outsports. “The freshmen who didn’t know me came and shook my hand. And they all said, ‘we’ve got your back.’ They told me how proud they were of me. Not even a single negative reaction. It was all positive.”

Coming out had been a long journey for the Division 1 college football player. Growing up, he was told how a “real man” was supposed to act. Being gay certainly didn’t fit into that mold. As a result, he suffered from depression. It wasn’t until he started seeing other athletes come out–people like Michael Sam, Wyatt Pertuset, and Scott Frantz–that he realized being gay was nothing to be ashamed of.

A lot of times when it comes to gay men in sports we feel like people think we will be ‘less-than’ because of our personal life. I got so caught up trying to please others that I fell into a path of always trying to help others and not myself. Finally I became courageous enough to be myself.

And after finding the courage to tell his coaches and teammates, Colvin says he’s received nothing but “overwhelming support.”

“What I’ve come to learn from my 105 teammates and 15 coaches is that no one cares, and it’s not as big of a deal as it used to be,” he says. “People care more about you as a person and your mental health. It took me a while to learn that.”

He adds: “I wish I would have been OK with myself sooner, but I think timing is everything. I feel like with the increased role this fall, on top of being more mature, I think this will work out well.”

Living in the shadow feels like the safe place to be No harm for them, no harm for me But life is short, and it's time to be free Love who you love, because life isn't guaranteed ? -Gloria Carter #lgbtbabes

With the 2016 season in the books I just want to thank God for all the opportunities he gave me this football season. Thank you Seniors. But now it's time to get back in the Lab. Watch over me Clink ??

God has a plan

Thanks for the much needed study break in Chicago…

get a life
27 comments

get a life
27 comments