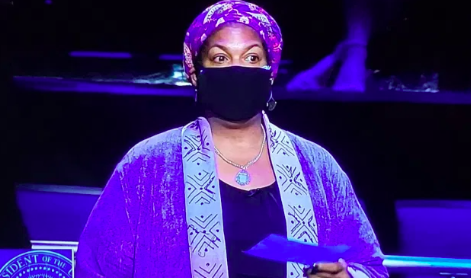 At one point during the live, hour-long debacle, Trump rudely interrupted a woman’s question about preexisting conditions… only to have her tell him to STFU and let her finish.

The question came from Dr. Ellesia Blaque, an assistant professor of African diasporic literature, history, and culture at Kutztown University, who was asking about the preexisting conditions mandate detailed in the Affordable Care Act and why the Trump administration is trying to have the mandate removed by the U.S. Supreme Court.

“And should preexisting conditions, which ObamaCare brought into … fruition be removed–” Blaque asked before Trump cut her off.

“Please stop and let me finish my question, sir,” Blaque fired back, before adding, “Should that be removed, within a 36 to 72-hour period, without my medication, I will be dead. And I want to know what it is that you’re going to do to assure that people like me, who work hard, we do everything we’re supposed to do, can stay insured?”

“It’s not my fault that I was born with this disease.”

"Please stop and let me finish my question sir."pic.twitter.com/U9JVxLkBUg

Ooo lord this Black woman asking about pre-existing conditions just told Trump to stop talking so she can finish her question.

Just FYI:
A BLACK WOMAN did not allow President Donald Trump to interrupt her question at his town hall last night.

She cut him off, and told him to let her finish. You’re welcome. ? It was awesome!

"Please stop and let me finish my question sir!" (Trump immediately shuts up.) -things only a Black woman could do. #TrumpTownHall

Sis name is Ellesia Blaque! ?Sis ?got a Bachelor Degree. A Master Degree. Oh, and a PHD. She's a Professor. She took him to class.#TrumpTownHall pic.twitter.com/nVjhMsElf7

Trump just got bitch slapped by a black woman professor!!!

Did yall see the black woman tell Trump not to interrupt her …and he shut up?

Trump just attempted to interrupt a black woman and she wasn’t having it.

A black woman stood up to Trump and refused to be bulldozed and interrupted by him at the ABC town hall. Fox news is calling it an ambush.

America is calling her a BOSS!

Professor Ellesia Blaque is my new hero, she should be an inspiration for all. pic.twitter.com/gD0oEpMqQL

Related: Weird video by self-hating gay Republicans claims Donald Trump is the “most pro-gay” president ever