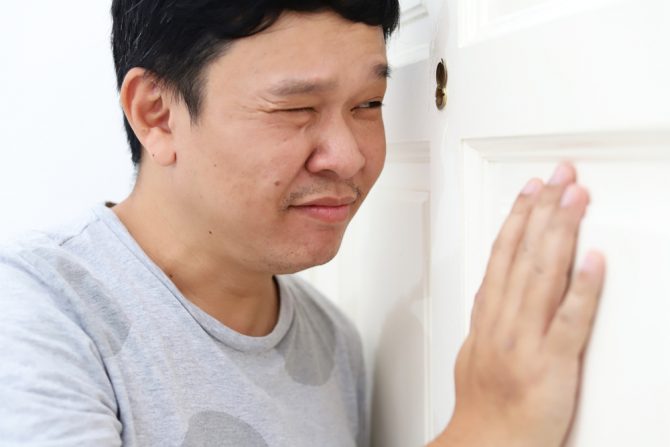 What do you do when the cute guy you’ve been chatting with on Grindr shows up at your front door and looks nothing like his profile pic? That’s what one young man on Reddit wants to know.

I meet this 26-year-old guy who has a blurry pic of him but he looks good. He talks to me and he’s a gentleman. Super respectful and all. We text. He’s really nice. Really proper, so we agree to meet. Something about this guy felt kinda weird though. I invite him over to my dorm since my roommates were gone.

A few hours later, the trick finally shows up. The two meet in the parking lot of the young man’s dorm.

I walk towards him. He sees me and starts walking towards me, but he looks weird. So I stop walking and I wait for him to walk into the light. He was, in fact, the same person in the only photo he had. But he wasn’t 26 years old. His hair looked healthy in the front, but in the back you could that it belonged to an old man. The guy was tall and was at least 35-years-old. He could even be in his forties.

At this point, the young man says he started to feel uncomfortable.

I ask the guy how old he is. He replied he’s 26, and he looks super weird. I tell him he doesn’t look like he’s 26 and he repeats he is. I ask him if he can show me his ID to prove me that he’s 26, since I feel uncomfortable. He tells me it’s not possible. The guy was being nice but still weird, so I tell him that I feel uncomfortable and that I don’t wanna go through with what we agreed.

The trick left without incident and, looking back, the young man says he feels like he put himself in a very awkward and potentially dangerous situation. He concludes by reminding his fellow Reddit users that “it’s okay to reject Grindr hookups in person. If the person is not what they said they were, or it doesn’t feel right, you can reject them.”

The post has received over 220 responses in less than a week, and people seem to have a lot of opinions about the matter.

“In these types of situations we often feel obligated or compelled to ‘be nice’ but in reality you have no obligation to do anything for any stranger,” one person responds. “It is in fact okay to say no.”

“Stay sexy and don’t get murdered,” another adds.

“This is exactly what people not using current pictures are counting on,” a third writes. “They’re counting on someone being too polite/non-confrontational to reject them to their face.”

Some are absolutely furious about what happened to the young man.

“I never understood those who send fake pics,” one commenter laments. “I mean, why waste your time and anyone’s else time?”

“No one is obligated just because they exchanged photographs and agreed to meet,” another says. “It’s not a contract! Don’t be manipulated! It never leads to anything good!”

“He was the douche for lying,” a third person adds.

Others say they’ve had similar experiences.

“OMG I have a similar experience,” one man says. “As soon as I got there I didn’t wanna do it anymore. I had an awful time but it was my fault for not having a plan B.”

Another writes, “I did it once. Just a BJ, but after that I thought about it and realized that the other guy was a total jackass for doing what he did. It’s not shallow to be upset when someone is intentionally using pictures that misrepresent themselves.”

“I’ve had this happen several times,” a third guy comments. “When I was early 20s, I’d made a date with a guy I’d met online. He’d said he was 23 and sent pics but when I turned up he was nothing like them. Easily 45 if not more.”

Then there’s this thoughtful response:

I had a situation where the other guy I met for a hookup just wasn’t that into me, for lack of a better phrase.

It kinda hurt my ego a little bit, not gonna lie, but I respected his boundaries and told him to have a good night.

No matter what though, everyone has the right to end a situation whenever they feel the need to end it. I’ve done it before, and had it done to me before, and every reasonable person needs to respect that.

How do you handle it when you no longer want to follow through with a planned hookup? Share your strategies and experiences in the comments below…