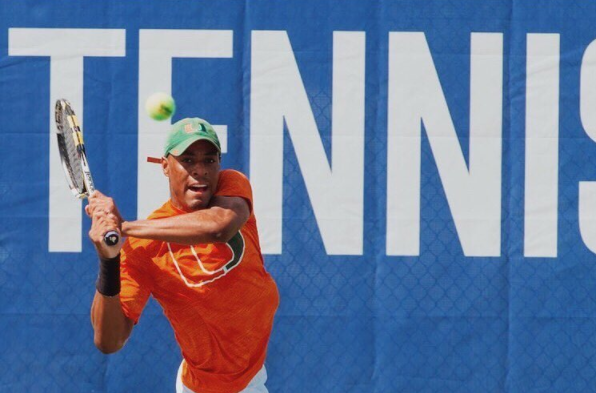 22-year-old college tennis player Nile Clark says he first realized he was bisexual around first grade after he started simultaneously crushing on a girl in is class and Erik von Detten from The Princess Diaries.

“It hasn’t really been confusing for me,” Clark tells OutSports “I was exposed to same-sex relationships very early on.”

One of his grade school teachers was gay, and he had a classmate with two dads.

In sixth grade, he came out to a close friend. He says the friend’s response was, “That’s fine. That’s cool.” The other people in his life had similarly supportive responses.

“I don’t have those ups and downs and pains and struggles in that area of my life,” Clark says.

Today, Clark is a member of the University of Miami men’s tennis team, where he just finished up his junior years. He says his sexuality hasn’t been an issue there either.

“I’m going to school in a time where same-sex marriage is legal, which creates a different environment socially, and that definitely eases things for me,” the 6-foot-2, 180-pound athlete explains.

So what’s the issue?

“People just think people will use it for a transition to, ‘Oh, I’m gay,’” Clark explains. “That’s a challenge that I have.”

Clark says part of the confusion probably has to do with the way he talks around different groups of people.

“It’s not something that I really do consciously,” Clark says. “It’s just something when you’re with people that have like interests, you’re going to share those like interests more than what you don’t have in common.”

As Clark prepares for his final year at the University of Miami, he says he hopes to start raising more awareness to bisexuality and bisexual athletes. He tells OutSports that he hopes in doing so it can help take the weight off other LGBTQ athletes.

“A lot of people struggle with their sexuality,” Clark says. “Me as a D1 athlete–I don’t think of me being anything great–but maybe that could affect someone else.”

If it doesn't involve a beach, a pool or a boat, I don't want to be bothered

I made sacrifices, I been ballin' ever since

It's the most wonderful time of the year

If these locker room walls could talk ?

It's always sunny in…

When everyone is out doing summer activities and you're still just chilling in a boot #??

Home for the holidays So when you see me, better holla at me I gotta get up out this city for it try to trap me

Thankful for another amazing semester