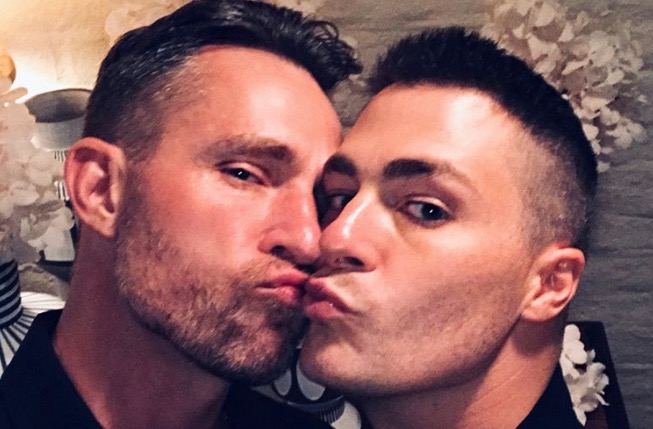 Colton Haynes and Jeff Leatham have reportedly decided to go separate ways after six months of marriage. Haynes has apparently marked the major life event with the release of a new song, “Man it Sucks (Acoustic)”.

The song was uploaded to Haynes’ YouTube on Thursday, and it’s being widely interpreted to be autobiographical, coinciding with the news of the split.

(Editors note: Colton has taken to Twitter to set the story straight that his song is about a past relationship and does not reflect his marriage.)

“I don’t like when you’re staying out all night and never answer your phone, I follow you around the world just to be left alone, and man, it sucks,” he sings. “I said I loved you despite the cheating drama. … Maybe in the future, you’ll come around.”

While neither party has made any official statements, an insider tells Us Weekly that “Jeff and Colton have been having relationship issues since a couple months after the wedding.”

“Since Colton stopped talking to a lot of his old friends, he was getting really depressed and didn’t feel like himself.”

The source adds that Haynes was recently out at a gay bar in West Hollywood and told people he was single.

The couple got engaged in March 2017 after dating for only a few weeks.

Leatham told People in October it had been “love at first sight.”

Images and video of the couple, including from their Palm Springs wedding, have been deleted off of Haynes’ Instagram, but as of this time, not from Leatham’s:

I have the honor and great pleasure of Marrying this Amazing Human Being tomorrow – I love him to the moon and back and I am Blessed to soon call him my #Husband – One more sleep baby ?????????????-

They have, however, both unfollowed each other.

The last photo of Leatham on Haynes’ Instagram is from January 21.