Former Bachelor star Colton Underwood has announced he is engaged, less than a year after publicly coming out.

Underwood, 30, revealed late last year that he had been dating political strategist Jordan C. Brown, 39. In January, it was revealed the two men had bought a house together in Los Angeles. That same month, Brown helped organize a 30th birthday bash for Underwood.

Related: Colton Underwood and boyfriend buy house together a month after going public

Underwood confirmed to People that they have become engaged.

“After my birthday, Jordan and I went to Big Sur for a weekend getaway to decompress and relax in nature. I couldn’t have pictured a more beautiful place to celebrate an amazing milestone in my life and relationship.

“I’m extremely happy! 2021 was the most transformative year of my life,” he continued. “Starting 2022 off with my best friend, teammate and now fiancé is something I never thought was going to be possible.”

Both men shared photos of themselves in Big Sur on social media yesterday.

Colton posted a picture alongside Jordan, saying, “Life is going to be fun with you ♥️”

They also shared well-wishes from friends and family. 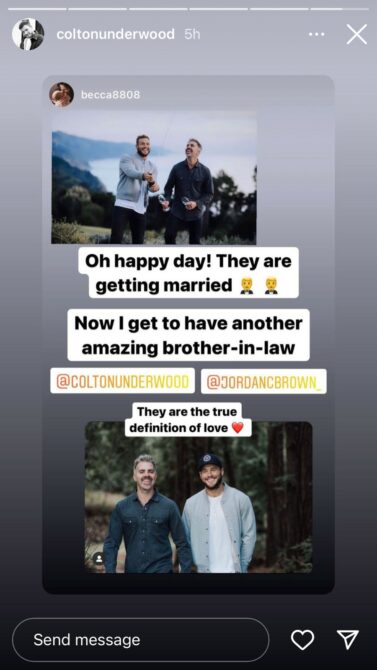 Underwood revealed he’s gay in an interview in April with Good Morning America. It was later revealed he was working on a documentary series for Netflix about his coming-out journey. That six-part show, Coming Out Colton, premiered on the streamer in December.

Underwood explained to People why he’d kept quiet about Brown while making and promoting Coming Out Colton.

There’s no word yet on when Underwood and Brown plan to tie the knot.