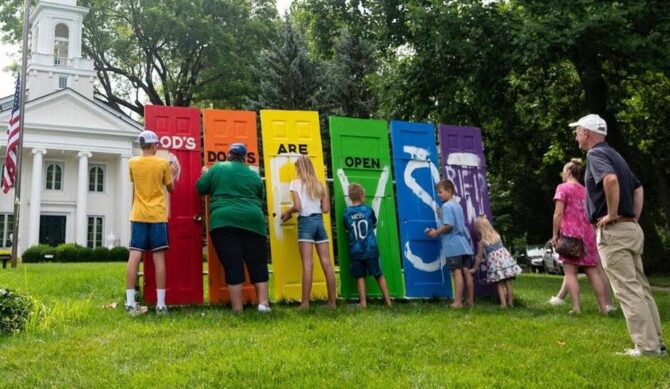 “God’s doors are open to all,” reads a set of rainbow-colored doors outside United Church of Christ in Kansas City, Missouri.

Apparently, a church preaching God’s love and acceptance managed to strike a nerve with some of the less Christ-like followers.

Neighbors awoke Thursday morning to find the doors had been vandalized with “PERVS” written across five of the doors and “REPENTANCE” on the sixth (the latter of which is written hastily, as if the vandal didn’t realize they were going to run out of letters in “PERVS”).

Hate is alive in KC. This happened in my neighborhood overnight. pic.twitter.com/9tTxO590Br

Related: Arsonist almost sets himself on fire trying to burn down a Pride flag display

They also covered over the “to all” of the message, because their version of heaven is apparently an exclusive club with St. Peter bouncing folks at the gates.

The city’s mayor quickly took to Twitter to publicly condemn the defacing, tweeting: “This is disgusting and has no place in Kansas City.”

This is disgusting and has no place in Kansas City. https://t.co/HUDiGwFcZs

It wasn’t long before the surrounding community was out in force, ready to remedy this aggression against the queer community.

Related: This gay Missouri legislature candidate refuses to back down from homophobes

Local citizens, including the family behind local business Switzer Brothers Painting and all five of their children, came out in full to help cover up the offending words and restore the bright colors of the display.

This neighborhood family sprung into action to help the church. @ScottSwitzer4 and his family’s business, Switzer Brothers Painting, know a thing or two about painting…apparently, it runs in the family…becasue those kids were awesome!! pic.twitter.com/OR6DUoLxEO

There are more of us than them. pic.twitter.com/ilvkz0CTXu

In just a few hours, the chromatic church piece was restored to its former glory:

I am absolutely blown away. I am at the site now and the community has stepped up to get the doors repainted. Hate is loud but make no mistake about it it does not represent the majority. #kc #pride pic.twitter.com/0N7PRbxhHO

No matter how much homophobes try to cover up the queer community, it’s clear that their hate is in the minority.