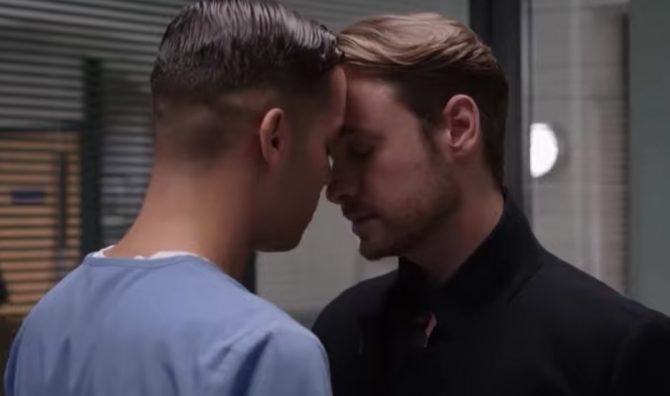 The BBC’s “fortnightly report” of its complaint service showed that British television viewers filed a ton of quibbles between January 20 and February 2.

262 people complained about “inaccurate or irresponsible advice given on care for infants” on the show Trust Me, I’m a Doctor.

254 people objected to “footage of LeBron James shown in error during coverage of the death of Kobe Bryant” on BBC News. (Oof.)

And 111 people, astonishingly, said it was “offensive to show scenes of same-sex couples kissing” on Casualty.

The medical drama — which has been on the air now for 34 seasons and more than 1,110 episodes — and spinoff Holby City have been upping their LGBTQ+ representation in recent years, according to PinkNews.

But it seems that the sight of two men sharing a relatively chaste kiss — as Shaheen Jafargholi’s Marty and Jack Hardwick’s Jack did in the January 25 installment — is too much to bear for some viewers. (Watch the two characters in a less-romantic scene below.)

It’s a familiar refrain for the creative forces behind the two shows. Oliver Kent, BBC’s head of continuing drama, told the Daily Star in July 2017 that they had received complaints of “too many gay characters” on Holby City. “And that’s because at the time we had two gay love stories,” he added. “We had four characters out of 17. I don’t think that’s disproportionate.”

BBC, meanwhile, has been dealing with homophobes for years. In 2008, the network defended an episode of EastEnders in which the character Christian and his new boyfriend, Lee, share a kiss. Amid the ensuing controversy, the BBC stated:

How unfortunate, then, that the network should have to deal with bigots lo these many years later.