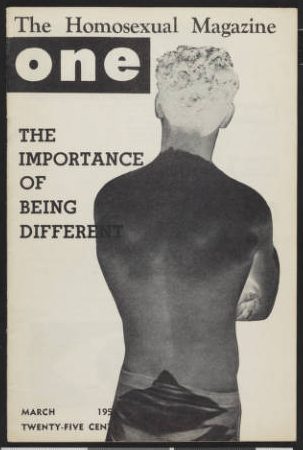 In honor of LGBTQ History Month, we’re taking a deep dive look-back at the first gay publication in America—ONE magazine. Launched in Los Angeles in 1953, ONE was published by One, Inc., which grew from The Mattachine Society, the seminal gay-rights group founded by Harry Hay. Its editorial founders were Martin Block, Don Slater, and Dale Jennings, who also served as editor-in-chief. Produced on a shoestring and sold for 25 cents, ONE began to change the course of history with an unapologetic exploration of homosexuality and the largely unexamined societal taboo against it.

This is the second in our series of ONE magazine cover stories.

Volume 2, Issue 3: The Importance of Being Different

This cover story—which provocatively begins “Homosexuals have some problems heterosexuals don’t have. Agreed?”—was written by the prolific Jim Kepner under one of his many pseudonyms, Lyn Pedersen. A brave activist with a difficult past (Kepner’s biological parents abandoned him under a bush in Texas, and he was later adopted into a religious family), Kepner had authored more than 2,000 articles, poems, stories, and essays for the gay press by the time he died in the 1990s.

This one pinpoints an issue the gay-rights community would continue to debate to this day: Should the goal be simple inclusion in the broader society, or was being gay the perfect opportunity to critique norms, blow open boundaries, and reshape society itself? Kepner leans toward the latter:

What can a Society accomplish if half of it feels its object is to convince the world we’re just like everyone else and the other half feels homosexuals are variants in the full sense of the term and have every right to be?

Homosexuals are natural rebels. … They find themselves compelled by wild and mysterious desires to cross the line which all the authorities have set between what they call Right and what they call Wrong.

Kepner goes on to identify two extreme reactions to this conundrum: becoming either reactively anti-social and anti-authoritarian or overly concerned with propriety to the point of cowardice, trying to fit in while “puritanically attacking the ‘swishes and fairies'” among the crowd. He wisely settles on this solution:

Will we leave room for disagreement, but with the basic group energies attacking the present laws and customs as unjust, developing ourselves as free individuals and joining a broad defense of liberty against the dead hand of conformity?

I am interested in defending my right to be as different as I damn please. And somewhere, I’ve picked up the notion that I can’t protect my own rights in that quarter without fighting for everyone else’s.

Magazine cover courtesy of ONE Archives