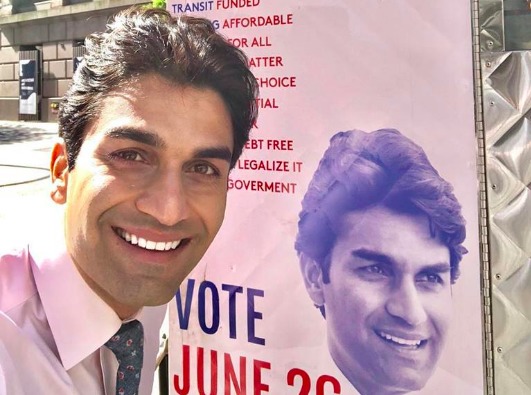 The 34-year-old is using hookup apps like Tindr and Grindr to connect with potential voters. Sorta like modern day phone banking, except he calls it “Tinder banking.”

Mr. Patel has waged the most millennial of campaigns. On a recent Thursday evening, he was sitting in a former bar in the East Village that he uses as his campaign headquarters. His campaign manager handed him one of three phones that was logged into the dating app Tinder, and Mr. Patel began furiously swiping right.

All around the bar — adorned with blue-velvet booths and a sound system that was playing Kanye West — campaign volunteers, logged onto Tinder, Grindr or Bumble, were doing the same thing. Mr. Patel calls it Tinder banking: Participants set up an account with a picture of an attractive person, usually not themselves, and begin seeking matches. Mr. Patel uses a picture of his brother.

“It’s kinda like catfishing,” he admits. “But you are telling people who you are.”

Once volunteers capture people’s attention with a picture of someone more attractive than themselves, they begin courting their vote.

But not everyone is into the idea of mixing politics with pleasure.

This is gross and seems like a big waste of time for volunteers if their hope was to talk to voters…He is type of candidate I would want to support but this is a turn off…”keep it flirty”?!

The practice is also in violation of Tinder’s rules, which bans soliciting other users on the app, as well as Grindr’s guidelines, which prohibit advertising and impersonating other people.

But Patel doesn’t seem to care.

The New York Post reports that he has a bit of a history of questionable behavior online:

In 2012, he posted gross Facebook comments about then-16-year-old Olympic gymnast McKayla Maroney, writing to a girlfriend: “We went to Top Shop. I bought a promise ring. Then they tried to arrest me” and “If this happens with McKayla Maroney … you can’t fault me, you know?. Sorry … you knew the deal.”

And in a 2010 post, he commented on a false story that claimed actor John Stamos had a fling with a 17-year-old.

How would you feel about being solicited for a vote on Grindr? Sound off in the comments section below…

skeletons in the closet
29