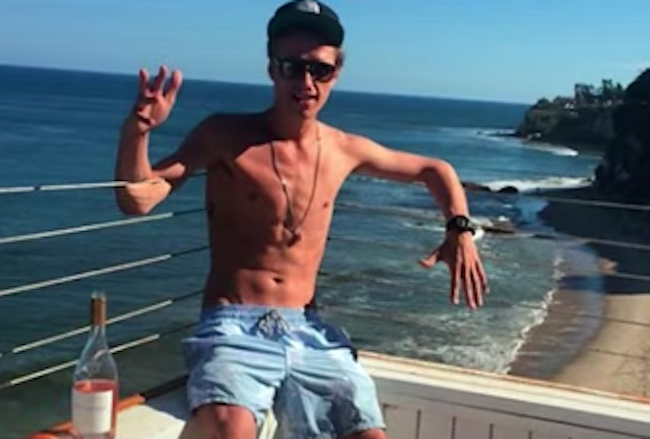 Conrad Hilton has found himself in jail after reportedly stealing Rick Salomon’s Bentley and going on an antigay rant to the arresting police officers.

TMZ posted video footage of the arrest on Monday, in which Hilton is heard screaming rape, accusing officers of touching his penis, and shouting antigay slurs.

Related: If You Thought Paris Hilton Was Bad, Wait Until You Meet Her Homophobic Younger Brother Conrad III

According to TMZ, “law enforcement sources say he also used the n-word.”

Elsewhere in the tape, you can hear him shouting, “I’m Conrad motherfucking Hilton, don’t you forget it.”

Paris Hilton’s 23-year-old brother, an heir to the family fortune, was arrested at E.G. Daily’s home.

[H]is long-suffering parents, Rick and Kathy Hilton, are said to be trying to use his latest arrest to force Conrad to get proper medical help.

Hilton was reportedly attempting to break into the home of Rick Salomon’s daughter Hunter, his ex-girlfriend.

It’s not the first time he’s gone on such a rant. In 2015, he was busted on a flight from London to Los Angeles after threatening the flight crew and smoking on the plane.

He also made children cry with his profanity-laced tirades and called everyone who dared be annoyed by his antics “peasants.”

Oh, and he almost punched a fellow male passenger who he thought was giving him “f*ck me” eyes.