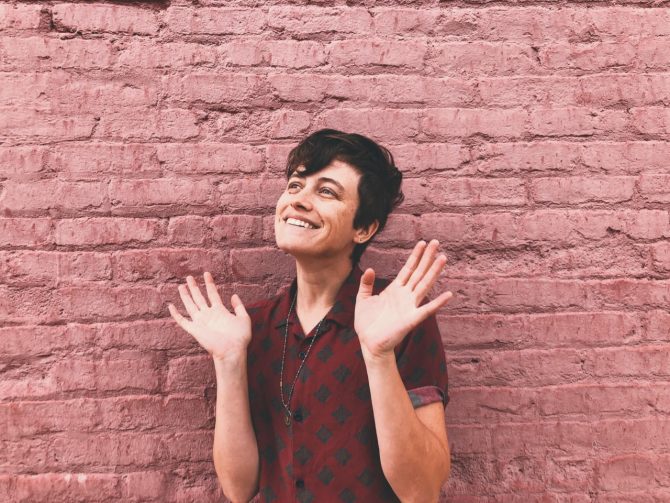 Hearing Chelsey Weber-Smith, host of American Hysteria, a podcast from Skylark Media “exploring the fantastical thinking and irrational fears of Americans,” speak, you would never guess their father was a doomsday prepper.

“My father is a brilliant person and we have a lot in common,” Chelsey, who identifies as nonbinary and queer, tells Queerty. “We are both constant seekers. We are always looking for an understanding of reality. [My experience with him] has shaped me in really positive ways in that I question everything, and I always want to know what’s underneath a topic.”

So it is only natural that Chelsey would create a podcast examining the bizarre beliefs that have been passed throughout American history, and why we fear the things we do. The topics discussed on the podcast may seem heavy for some, but that’s part of what Chelsey loves about creating American Hysteria.

“What’s so great about [making the podcast] is that it feels like an investigation, always,” Chelsey says. “It is kind of like how you imagine someone in a basement connecting all of the clues with yarn, that is definitely what it feels like.”

We recently sat down with Chelsey to discuss their podcast, what it’s like to be a no-binary queer creator, and how their conspiracy theorist father ultimately influenced American Hysteria.

Here are 5 things to know…

“My father was a 2012 apocalypse prepper, so by the time I was in my early 20s, that was a very big theme [in my life],” Chelsey tells Queerty. Much of Chelsey’s life as a teen “involved the illuminati, and the idea that there was going to be natural disasters, or some kind of nuclear holocaust that we needed to protect ourselves from.”

Despite this extreme thinking, Chelsey says their upbringing ultimately influenced how they viewed the world. It forced them to really “try and understand how our rational fears have shaped our culture,” a central theme that runs throughout American Hysteria.

Each episode is meticulously researched, and includes archived interviews and audio – all centered around a primary topic or idea.

“If you look, all of the things we explore – all of the conspiracy theories and urban legends and fears we talk about – they all have a history that can be traced back to the Puritans.” Most of the topics American Hysteria cover are “very dark things that people may have forgotten, but still affect us today.”

Previous episodes have explored the effect that violent video games have on school shootings, the origins of the so-called “gay agenda,” and even the belief that Furbies were used to spy on people.

A single episode can take 3-4 weeks to make, from start to finish – and it’s a lot of work.

“My process is pure chaos,” Chelsey says with a laugh. “I’ll typically have 30 pages of notes, and then somehow it gets whittled down into these little episodes.”

Many of the episodes take several hours to make, and deal with hot button issues such as race, misogyny, and white supremacy. Though they are planned out months in advance, the themes discussed in each episode are continuously relevant.

No matter the topic at hand, Chelsey says “everything feels like a risk, because you never know how people will receive it.” The risk seems to be worth it though, seeing as the podcast has close to 50,000 subscribers since its launch in November 2018.

Chelsey is one of the few queer, non-binary podcast creators out there.

Chelsey is proud to be among a handful of marginalized podcasters on the airwaves. Though the experience of creating American Hysteria as a nonbinary queer has been mostly positive, Chelsey does acknowledge it comes at a bit of a cost.

“I think the hardest part has been just owning my pronouns,” says Chelsey, who goes by they/them. “Because, as I’m sure you’re aware, we are in a moment in time where a lot of the world is aware, and a lot of the world has never even heard of that. So, I think my exhaustion comes from the constant explanation of how I want to identify.”

At the same time, Chelsey doesn’t let it get to them. “I don’t mind people not understanding, or people messing up. I really think the best part of this whole journey is allowing for mistakes to happen, is allowing grace, and allowing change to occur in a way that is positive and productive.”

As for dealing with trolls? Chelsey has a method for dealing with them, too. “I, by law, do not read the reviews of American Hysteria,” they joke. “Instead, I talk to my friends and family, I talk to the fans, and they help direct me. I don’t want to entertain the haters, I don’t need their opinion.”

Turns out, the world didn’t end.

Despite their dad’s belief, it turns out the world didn’t come to an end after all, something Chelsey remembers vividly.

“I remember being asked to come to Mount Rainier in Washington, which was the place [for apocalypse preppers] to go at that point,” they say. “I had been thinking about [the end of the world] for so long. You know rationally it’s not going to happen, but emotionally, there is still something in you that questions whether you are safe, right?

Nonetheless, I went, and sat by myself that night and kind of thought about everything and reflected… and then nothing happened, as I knew it wouldn’t [laughs]!”

As for their father, Chelsey is quick to point out that their father no longer believes the world is going to end anytime soon. “He has evolved,” they say. “He’s not really into that anymore. He has always been an activist, so he channels that into different projects now.”