We believe it was Maya Angelou who once said: “Youth is thinking Michael Carrington is hot, but adulthood is knowing Louis DiMucci can get it.”

This famous quote rang in the heads of many New Yorkers who were seated for a recent 40th anniversary screening of the other film about T-birds, Pink Ladies, and Eisenhower-era quasi-feminism, Grease 2. Incidentally, this screening took place the day of Olivia Newton-John’s passing, a round-about but ultimately fitting tribute to a legend.

Related: That time Olivia Newton-John gifted us with a totally gay music video for “Physical”

Though much maligned, Grease 2 is the urtext to many a homosexual origin story. Yes, Maxwell Caulfield’s smolder made us gay, but Michelle Pfeiffer singing “Cool Rider” atop a ladder in skin-tight black leather made us queer. That said, upon this 1,369th viewing of the questionably inappropriate childhood staple it became clear how fully the men of Grease 2 are serving every flavor, checking every box, and satisfying every kink. From an alarmingly virile Sid Caesar’s arms to The Guy Whose Balls Fall Out of His Shorts While He’s Doing the Hurdles In The Background, here are the hottest men of Grease 2:

14. The Guy Whose Balls Fall Out of His Shorts While He’s Doing the Hurdles In The Background (Actor Unknown) 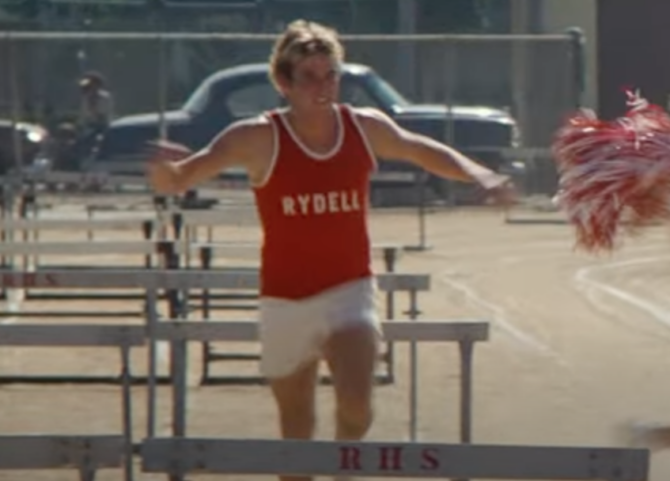 Last year, a viral tweet exposed–tee-hee–a member of the Rydell Track Team having a wardrobe malfunction while hurdling. That is not a euphemism; the man’s balls literally fall out of his shorts. It felt impossible to write a list ranking men’s hotness without including the only nudity bit in the film. Them’s the rules.

There’s something about a high school teacher 40 years past retirement age being brought to the brink of madness by the shenanigans of the T-Birds that is just, you know, sexy.

This poor man’s version of Sean Astin seems sweet—and built like a table beer keg—but ultimately ends up low on the list because he lacks the innate sexual charisma of the Adrian Zmeds of the world.

Willie is complex. He claims “he’s gonna be sick” during the overly sexual, oddly graphic “Reproduction” number but then gives a sexy-the-house-down performance of ‘Cryin’’ at the Talent Show. That is depth. That is layers. That is mystery. What else are you hiding, Willie?

It is one of the great trivia facts that the director of Ever After and Sweet Home Alabama was not only in Grease 2 but was reprising his role from the original Grease! Truly nothing could be hotter.

OK, but hear us out: Maybe we can change him?

In a rare instance of courage two films in the making, Eugene stands up to the T-Birds. It is in that moment we get a glimpse of the BDE that Eugene is hiding behind his glasses and pocket protector.

Look, it’s not hard to imagine why the Segal Twins were fighting with Muffy Rogers over Brad: The man wears pants that buckle in the back. I think we all know what that means. Fun fact: Matt Lattanzi was Olivia Newton-John’s first husband!

The only thing putting Goose this far down the list is knowing that Christopher McDonald would ultimately reach his sexiness peak as a full daddy in Hacks four decades later.

To our surprise, we found ourselves incredibly drawn to 60-year-old Sid Caesar doing full-on Coach/Athlete role play, complete with whistle, short-shorts, and some impressive biceps smuggled under his grey sweatshirt. We’re all living in this post-“Sid Caesar was hot” reality now–deal with it!

For years, Adrian Zmed was basically a punchline (we just made a joke about him not 500 words ago in this very post). But let’s be clear: We’re here to tell you that Johnny Nogerelli can–and this is a technical term–ruin our life, throw us off a cliff, hit us with his car, etc., etc., etc…  As they say: “It’s the lats for me. It’s the falsetto for me. It’s his love of bowling for me.”

It’s a tale as old as time: Boy meets girl, boy tricks girl into believing they are in the midst of a Russian attack and traps her in an underground bunker to convince her to give up her virginity before the end of the world, boy—no, actually, wait, that’s the end of their arc. So yeah, he’s a bit of a scamp. But, whew, that smile could light up a thousand nuclear warheads.

If Michael Carrington looked at any one of us we would, quite simply, die.

Grease 2 is available to stream for subscribers of FuboTV, Freeform, and Sling. It can also be digital purchase/rented on Amazon Prime Video, GooglePlay, YouTube, Vudu, and iTunes.

Kellyanne Conway may want to stay off Twitter today