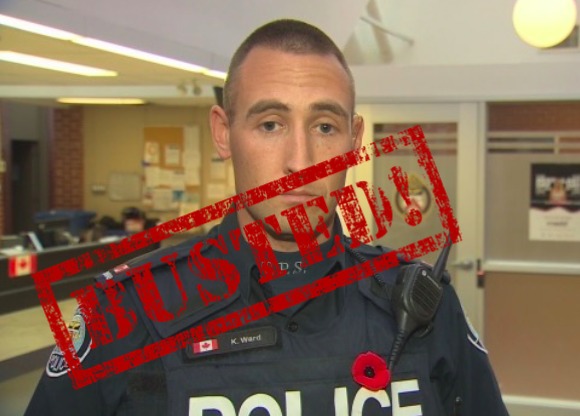 The operation was called “Project Marie.” Undercover officers, under Ward’s direction, would go into public parks and pretend to be cruising for sex then arrest anyone who approached them. A total of 72 people were taken into custody and 89 charges were filed over a six-week period in 2016.

“I want anyone engaging in these illegitimate activities to know that this is no longer a safe place for this to happen,” Ward said at the time. “We are going to be at the park every day and we will not be tolerating it.”

Well, Karma keeps receipts. She recently returned for Ward. And she brought her sister Irony along with her.

Metro News reports that Ward was just slapped with three charges of professional misconduct involving himself and several female college students, ages 18 to 26, who claim the officer did and said pervy things to them… in public, of all places!

The women were all members of the rover crew at Humber College, a leadership program for young adults interested in becoming police officers. Ward was one of the group commissioners. The alleged incidents happened between September 2016 and January 2017.

According to one young woman in the group, who is identified in the report by her initials, C.H., Ward “made inappropriate comments, gestures, or suggestions” to her on multiple different occasions.

Another young woman, identified as I.G., says he made an “inappropriate comment” to her while they were in a canoe together.

In a statement, a spokesperson from the college says the school is “very concerned about any possible harm that may have been done and will follow this situation closely,” adding that Ward will “no longer be involved in the program.”

The statement continues, “We take any allegations of inappropriate behavior towards our students seriously, and the safety and well-being of all on campus and the integrity of our programs are of the utmost importance to us.”

Ward recently appeared before a disciplinary tribunal, where he entered no plea. The Toronto Police Department said they do not comment on ongoing cases, but to quote Ward himself:

The community wants anyone engaging in these illegitimate activities to know that this is no longer a safe place for this to happen. We are scrutinizing what you do every day and we will not be tolerating it.