Shocking news: Among the Alabama police force are some seriously bad apples. OK, not so shocking.

But Madison County Deputy Jeff Graves is a special kind of horror show, the kind who uses the tragic death of a bullied, queer 15-year-old boy to crack a homophobic joke.

Unnecessary doesn’t even begin to describe Graves’ decision to comment on the WZDX Facebook page linked to a story that featured student Nigel Shelby, who died by suicide, reportedly after being bullied for being gay.

That’s my kind of LGBTQ movement

Oscar Wilde he is not.

And it didn’t even stop there. Here’s how it looked on Facebook: 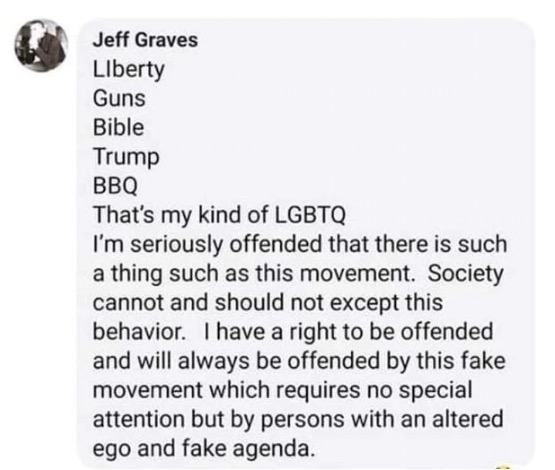 “I’m seriously offended there is such a thing such as the movement,” Graves continued. “Society cannot and should not accept this behavior. I have a right to be offended and will always be offended by this fake movement which requires no special attention but by persons with an altered ego and fake agenda.”

Graves is indeed correct that he holds the right to be offended, but so too does the Madison County Sherriff’s Office have the right to hold its officers to a standard somewhere above human trash heap.

And while this is in no way an endorsement of that particular police force — who knows what other injustices are hiding underneath its weight — in this case, for either the proper reason of human decency or for a more calculated PR move, the right thing was done.

“The Sheriff’s Office holds all its employees to high standard, and the public can be assured that a thorough and complete audit will be conducted and appropriate action will be taken,” said Madison County Lt. Donny Shaw, a sheriff’s office spokesman, in a statement. “The involved employee has been placed on administrative leave pending the outcome of the audit.”

In the same statement, sheriff Kevin Turner offered “his condolences to the family and friends of Nigel Shelby whose young life was lost to suicide last week.”

“Bullying of any group or person in or outside of schools is unacceptable, and I welcome any and all efforts to raise awareness to bullying and bring bullying to a stop,” Turner added.

Here are warning signs to watch for if you fear someone is suicidal and resources that can help those thinking of harming themselves or who fear a loved one might harm themselves, via AL.com.