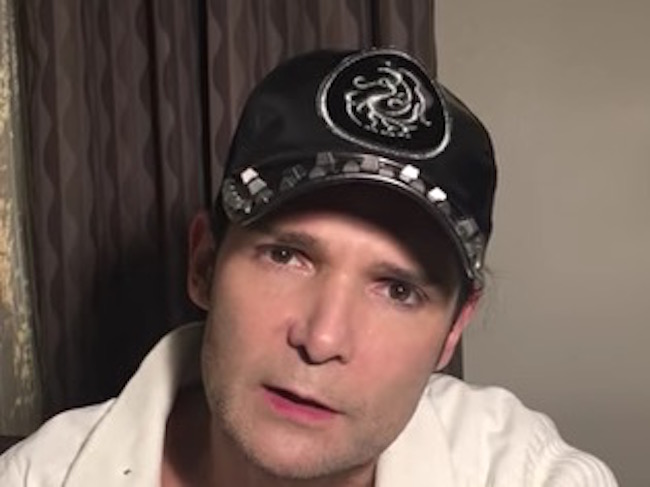 Corey Feldman has long maintained he was the victim of sexual abuse at the hands of Hollywood bigwigs along with his late friend, actor Corey Haim.

In the past, Feldman’s intimated Haim was raped at 11 by a powerful Hollywood exec and that’s what led to the actor’s problems with substance abuse. Haim died in 2010 from pneumonia at 38.

Now, Feldman says he’s been marked for death since coming forward and suggesting he’ll expose a Hollywood pedophile ring — six names, he says, and one person who’s still quite powerful in the industry.

Since making that claim, Feldman says he’s been arrested and nearly killed by two speeding trucks at a crosswalk. Some members allegedly quit his band since they fear for their lives.

He wants other actors to come forward.

“I know there are thousands of others that have experienced what I have experienced in the entertainment industry. I also know that there are peers of mine who know exactly what I’m talking about and know all of the details but have been afraid to come forward with their own truths.”

According to his IndieGogo page:

The best way, he feels, in order to tell the whole story, is for Corey to come forward in the form of a film about his life. We are embarking on a dangerous and exciting journey to get to the bottom of the truth. However in doing so there are great security risks.

Talking to The Hollywood Reporter, Feldman says, “I would love to name names.”

People are frustrated, people are angry, they want to know how is this happening, and they want answers — and they turn to me and they say, ‘Why don’t you be a man and stand up and name names and stop hiding and being a coward?’ I have to deal with that, which is not pleasant, especially given the fact that I would love to name names. I’d love to be the first to do it. But unfortunately California conveniently enough has a statute of limitations that prevents that from happening. Because if I were to go and mention anybody’s name I would be the one that would be in legal problems and I’m the one that would be sued. We should be talking to the district attorneys and the lawmakers in California, especially because this is where the entertainment industry is and this is a place where adults have more direct and inappropriate connection with children than probably anywhere else in the world.

No word yet on why Feldman thinks a million-dollar movie will set influential wheels in motion and ultimately upend California’s statute of limitations.